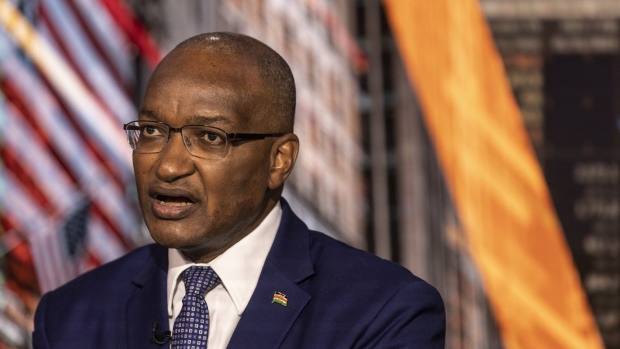 (Bloomberg) -- Kenya’s central bank slowed the pace of rate hikes at its final meeting of the year, while citing an ongoing need to anchor inflation expectations.

The rate was increased to 8.75% from 8.25%, Governor Patrick Njoroge said in an emailed statement Wednesday, matching forecasts. That compares with 75 basis points at the monetary policy committee’s September meeting. The hike is the third in 2022 and brings cumulative increases to 175 basis points, the most in seven years.

The MPC acted because of “sustained inflationary pressures, the elevated global risks and their potential impact on the domestic economy,” Njoroge said.

By taking a less aggressive tack, Kenya is diverging from the US Federal Reserve, which earlier this month raised rates by 75 basis points for the fourth straight time. Central banks in developed economies like Israel, Canada and Australia have also pivoted away from outsized rate hikes over the past month.

Annual inflation has been above the central bank’s 7.5% ceiling since June and quickened at a faster pace than forecast last month to 9.6% -- a level last seen in 2017 when a severe drought drove up food costs.

Price pressures are likely to remain elevated in the short term due to increases in excise duties, the scrapping of some fuel subsidies and the continued depreciation of the shilling, Nairobi-based Cytonn Investments said in a research note ahead of the release.

The shilling has slumped by more than 8% against the dollar this year. Interventions to try slow the decline and a jump in import costs due to a strong dollar and surging commodity prices have caused foreign-exchange reserves to fall to $7.04 billion currently, from $7.4 billion in September. That’s enough to cover 3.94 months of imports.

While Kenya targets to maintain reserves at a minimum of four months of estimated imports, the central bank said current holdings “continue to provide adequate cover and a buffer against any short-term shocks in the foreign exchange market.”