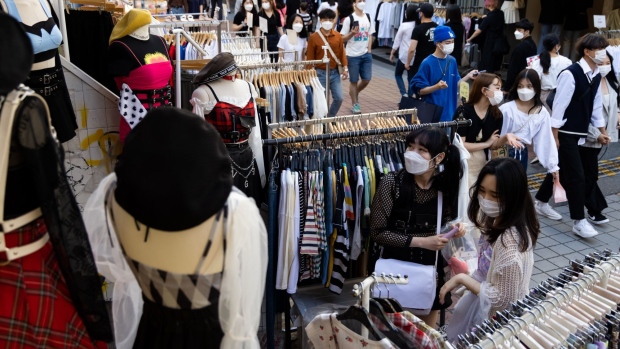 (Bloomberg) -- South Korea’s inflation unexpectedly climbed in July as the central bank prepares to meet on rates amid the nation’s worst coronavirus outbreak yet.

Consumer prices rose 2.6% from a year earlier, accelerating from a 2.4% pace the prior month, the statistics office reported Tuesday. Economists had expected the rate to stay at June’s level.

The pickup in inflation comes as a recent surge in virus infections to over 1,000 new cases a day and tougher social distancing rules cloud the outlook. Bank of Korea Governor Lee Ju-yeol has signaled he’s preparing to raise rates to prevent asset bubbles from worsening, but he’s also said the timing depends on the virus situation.

Headline inflation has now exceeded the central bank’s mid-term goal of 2% every month since April, pushed up partly because of the comparison with last year’s dismal figures. The BOK sees price gains fluctuating around its target for the rest of the year before sliding lower in 2022.

A report last week showed Korea’s growth slowed last quarter from its speedy pace at the start of the year, but the central bank made clear it still sees the recovery in line with its forecasts.

A 34.9 trillion won ($30 billion) extra budget passed last month to shore up consumption could boost economic activity and add upward pressure on prices in the short-term. The stimulus aims to provide cash handouts to almost 90% of South Korean households and fuel consumer spending.