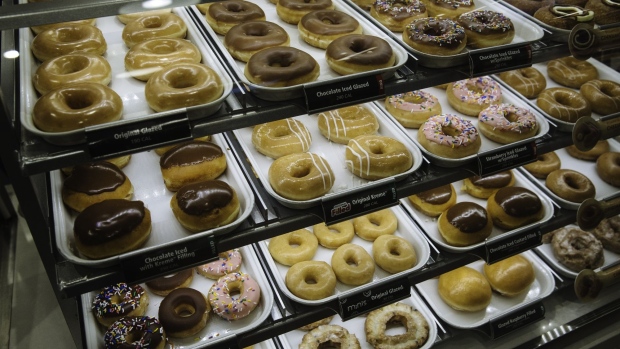 Krispy Kreme Inc., the doughnut chain owned by JAB Holdings BV, is seeking to raise as much as US$640 million in an initial public offering.

The company said in a filing Tuesday that it plans to sell almost 27 million shares for US$21 to US$24 apiece. At the top end of the range, Krispy Kreme would have a market value of US$3.86 billion based on the outstanding shares listed in the filing with the U.S. Securities and Exchange Commission.

Amid photos of doughnuts dripping with sugary glaze and dotted with sprinkles, the company declares in the filing that its purpose is “to touch and enhance lives through the joy of Krispy Kreme.”

Since its acquisition by Luxembourg-based conglomerate JAB in 2016, Krispy Kreme has expanded its online presence. Its e-commerce business now accounts for close to a fifth of sales in the U.S., fueled by its Insomnia Cookies delivery concept.

Net revenue for the Charlotte, North Carolina-based chain rose 23 per cent to US$322 million in the quarter ended April 4, according to the filing. Its net loss for the quarter shrunk from US$11 million in 2020 to US$378,000 this year.

Krispy Kreme plans to use proceeds from the IPO to pay down debt and buy back shares from certain executives, as well as for general corporate purposes, according to the filing. JAB will continue to own almost 78 per cent of the company’s shares after the IPO.

The offering is being led by JPMorgan Chase & Co., Morgan Stanley, Bank of America Corp. and Citigroup Inc. The company plans to list on the Nasdaq Global Select Market under the symbol DNUT.