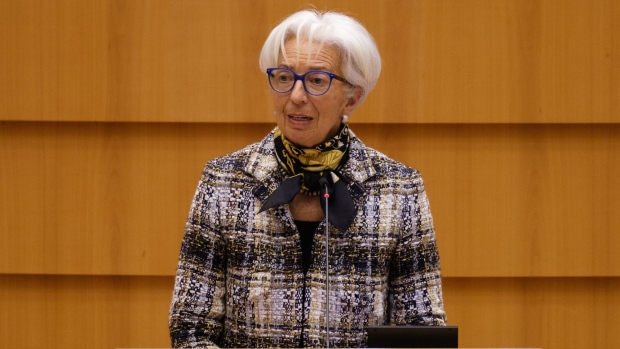 Christine Lagarde, president of the European Central Bank (ECB), addresses the European Parliament in Brussels, Belgium, on Monday, Feb. 8, 2021. Lagarde predicted the euro-area recovery will pick up in the summer, while stressing that public authorities will have a difficult job weaning the economy off of emergency support. Photographer: Thierry Monasse/Bloomberg , Bloomberg

(Bloomberg) -- European Central Bank President Christine Lagarde said her institution will probably adopt a mix of home- and office-based working after the pandemic, acknowledging that the crisis has shown how much can be done remotely.

Employers around the world are grappling with whether they’ll return to their pre-pandemic working habits or whether they’ll offer staff more flexibility. Although surveys show working from home is popular, some business leaders are keen to get people back on-site.

Lagarde, who said she has temporarily moved her own base from the ECB’s Frankfurt headquarters to her native France, signaled sympathy with both views.

“We work with people and we need to have people come together, talking to each other, looking at each others’ eyes,” she said at a conference hosted by the Aspen Institute on Wednesday, “It’s going to be a combination of both.”

Data have shown show more staff returning to their offices in major cities in the U.S. and U.K. -- both of which are well ahead of the euro zone on vacinations.

Goldman Sachs Group Inc.’s Chief Executive Officer David Solomon has called remote working during the pandemic an “aberration” that needs to be corrected as quickly as possible, and JPMorgan Chase & Co. this week became the first major U.S. bank to mandate a return to offices for its entire U.S. workforce.

Deutsche Bank AG is working on plans to allow staff to work from home up to three days a week, as it considers one of the most flexible return-to-office policies among large international banks.