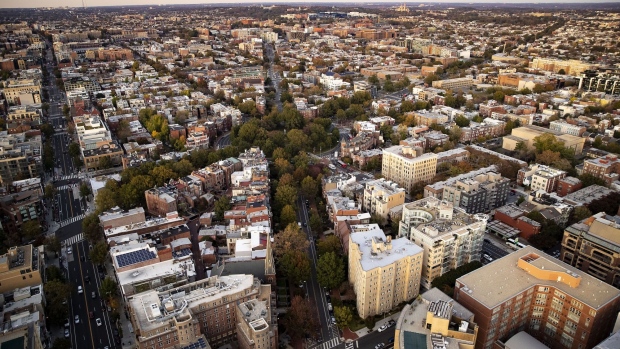 The Logan Circle neighborhood is seen in this aerial photograph taken above Washington, D.C., U.S., on Tuesday, Nov. 4, 2019. Democrats and Republicans are at odds over whether to provide new funding for Trump's signature border wall, as well as the duration of a stopgap measure. Some lawmakers proposed delaying spending decisions by a few weeks, while others advocated for a funding bill to last though February or March. Photographer: Al Drago/Bloomberg , Bloomberg

(Bloomberg) -- A landlords’ lobbyist said it sued the U.S. government to recover damages the organization claims its members suffered as a result of a federal moratorium on evictions.

The National Apartment Association filed the lawsuit Tuesday at the U.S. Court of Federal Claims in Washington, the organization said in a statement. The complaint wasn’t immediately available on the court’s electronic docket.

The NAA claims that by the end of last year, more than 10 million delinquent tenants owed $57 billion in unpaid rent. Apartment owners are now responsible for $27 billion of debt not covered by federal rental assistance, the group argues.

The moratorium issued by the U.S. Centers for Disease Control last year has hurt landlords who provide critical rental housing, and “sets a dangerous precedent for future disaster-response measures,” according to the complaint. Property owners forced to maintain their properties were unfairly prohibited from evicting tenants not paying rent, and from renting to paying tenants, according to the suit.

The U.S. Justice Department didn’t immediately respond to an email seeking comment on the suit.

The CDC moratorium was put in place by former President Donald Trump’s administration and extended under Biden. It had been set to expire June 30 before the CDC announced what it said was a final, one-month extension on June 24.

Last month, the U.S. Supreme Court refused to lift the federal moratorium on evictions during the Covid-19 outbreak, leaving the ban in place until the end of July. By a 5-4 vote, the justices rejected calls by landlords and real-estate trade associations from Alabama and Georgia to block the moratorium while a challenge goes forward. The groups claimed the CDC exceeded its authority by imposing the ban.