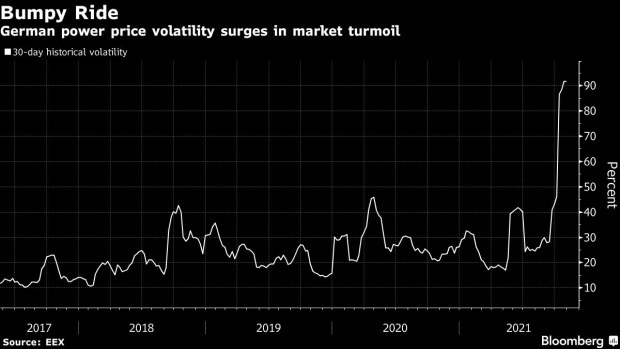 Electricity transmission pylons in Gerakas suburb, northeast of Athens, Greece, on Tuesday, Oct. 12, 2021. European Union leaders are poised to authorize next week emergency measures by member states to blunt the impact of the unprecedented energy crisis on the most vulnerable consumers and companies. , Bloomberg

The unprecedented volatility in European energy markets is taking its toll on trading activity.

Buying and selling in German next-year power futures slumped to its lowest level since the end of May on Monday. That’s bad news for everyone from utilities to industrial users who rely on the European Energy Exchange AG’s benchmark to either source the commodity in advance or hedge future sales.

The contract jumped to a record 179 euros ($208) per megawatt-hour early this month, mainly driven by the surge in natural gas prices. More importantly for traders, volatility doubled this month to the highest in at least a decade. The bigger price swings mean traders need to put up more capital, or collateral, to cover their transactions.

As little as 163 megawatts were traded on Monday, compared with more than 1,600 megawatts early in October, according to exchange data on Bloomberg.