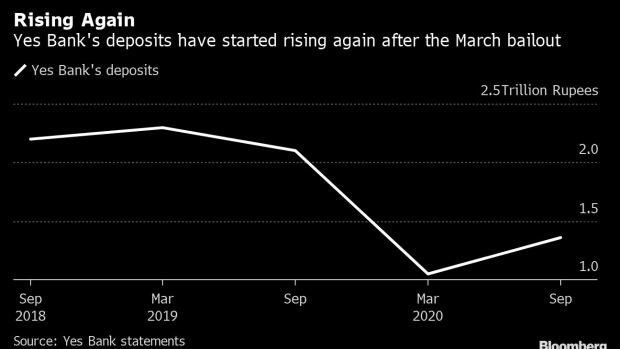 A security guard wearing a protective mask stands outside a Yes Bank Ltd. branch on a near-empty street in Mumbai, India, on Monday, May 4, 2020. India's central bank Governor Shaktikanta Das and the chief executive officers of the nation's banks have discussed ways to ensure credit flow to businesses once the world's toughest stay-at-home order ends. Photographer: Dhiraj Singh/Bloomberg , Bloomberg

(Bloomberg) -- The chief executive officer of Yes Bank Ltd., who helped the lender emerge from India’s biggest-ever bailout, is girding for fallout from the pandemic.

The coronavirus outbreak has “created a problem” on the loan book, even as progress has been made on fixing key drawbacks such as weak governance, fund-raising challenges and declining deposits, Prashant Kumar said in a phone interview Saturday.

It’s “very, very difficult to estimate the impact,” Kumar said. “With the fundamental issues taken care of, we want to control costs and increase profit to deal with any adverse impact on the credit due to the pandemic.”

Yes Bank returned to profit in the quarter ended September and Kumar made provisions for potential covid-related losses. When regulators seized the lender in March, its depositors had been fleeing and the bank was struggling to attract investors. State Bank of India bought a stake in Yes Bank and Kumar was plucked from the government-controlled lender to lead the turn around.

His predecessor, Rana Kapoor, who co-founded Yes Bank in 2003 and built it into India’s fastest-growing lender, was forced out by the central bank in 2018 amid a dispute over reporting of bad debts.

“The market wasn’t even sure how much rot was still in the loan book,” Kumar said.

He decided to play it safe and cover 75% of credit for potential losses. However, just days after he took the helm, India announced the world’s strictest lockdown to contain the coronavirus.

Kumar pressed on with his plan. He raised about $2 billion of additional equity capital in July, enough for two years, albeit at as much as a 55% discount to the market price. To bolster governance he separated departments that originate loans, assess risk and resolve stressed assets. Kumar also set aside an hour each day to personally call depositors and assure them of Yes Bank’s stability.

The loan book for retail customers and small businesses hasn’t weakened despite the pandemic, he said.

Kumar’s goal for now is to limit costs and create a cash cushion to absorb any unforeseen deterioration in asset quality. He said he wouldn’t want to dip into precious capital and identified a delayed return on assets as the biggest risk.