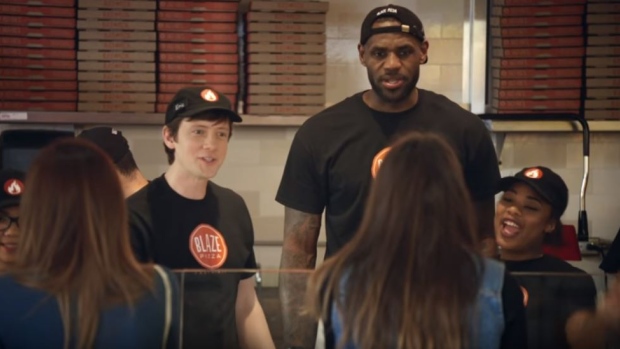 The chain, founded in 2011, will open its first overseas shop in March in Kuwait through a partnership with M.H. Alshaya Co. Blaze also is looking to expand to Mexico, Asia and Europe, Chief Executive Officer Jim Mizes said in an interview.

The company is angling to lead the market for so-called fast-casual pizza, a category known for fresh ingredients and the use of a Chipotle-style assembly line. Blaze Pizza’s system sales — a metric that includes money generated by franchisees -- jumped 51 per cent last year.

The goal is “global domination in the fast-casual pizza space,” Mizes said. “There are many more countries we are going to plant our flag in.”

James, who has won three National Basketball Association championships, has helped market Blaze Pizza — including an ad where he worked behind the counter at the chain. The athlete invested in the company in 2012 and walked away from an endorsement deal with McDonald’s Corp. (MCD.N) in 2015 so that he could become Blaze’s “brand ambassador.”

The company also sold a significant noncontrolling stake last year to Brentwood Associates, giving it an enterprise value of more than US$100 million. Blaze has set a goal to reach 1,000 stores and go public as soon as 2022.

“We’d like to go public when we can achieve a billion-dollar valuation,” Mizes said. “We think that’s sometime in the next four to seven years.”

In the meantime, Blaze is introducing delivery options and recently starting offering the service through Caviar in about 18 of its 248 locations. It’s also working with Postmates Inc., DoorDash Inc. and Uber Eats to bring pizzas to customers’ homes and offices.

But the fast-casual category can be treacherous. Chipotle Mexican Grill Inc. (CMG.N), long the industry darling, has struggled to bounce back from a food-safety crisis. Noodles & Co. (NDLS.O) — another chain that was seen as an innovator — saw a sales drop of 5.8 per cent in 2017, according to research firm Technomic.

Blaze, based in Pasadena, California, is projecting a comparable sales increase of between three per cent and five per cent this year after gaining 3.7 per cent in 2017, Mizes said. The company looks to maintain growth by updating its menu. It also is testing a half-pizza and salad option, along with cheese-stuffed dough knots.

“It has been a challenging first couple of months,” Mizes said.