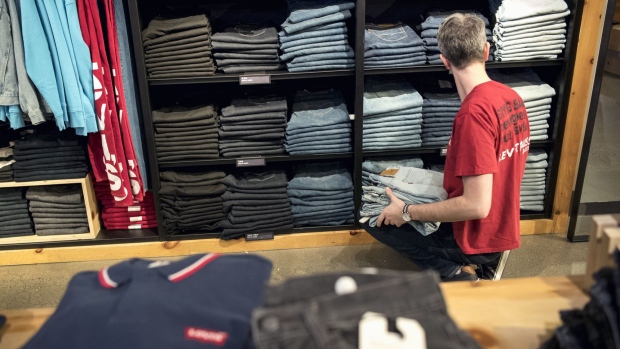 An employee arranges jeans inside the Levi Strauss & Co. flagship store in San Francisco, California, U.S., on Monday, March 18, 2019. Levi Strauss & Co.'s initial public offering, currently set at 36.7 million shares seen pricing at $14 to $16 each, is expected to price on March 20 according to the NYSE website. , Photographer: David Paul Morris/Bloomberg

Levi Strauss & Co. rose after the denim maker said it expects strong sales growth in the first half of the year, signaling that pent-up demand could spur a post-pandemic retail recovery.

The company sees net revenue jumping 24 per cent to 25 per cent in the first half of fiscal 2021 compared with the same period a year ago, it said Thursday in a statement. That’s up from a previous projection of 18 per cent to 20 per cent. Adjusted earnings will be 41 cents to 42 cents a share for the first two quarters this year, topping the average analyst estimate compiled by Bloomberg.

Levi is the latest retailer showing signs that it sees consumers spending more later in the year as vaccine distribution continues and pandemic lockdowns end. Macy’s Inc. and Kohl’s Corp. have said they expect similar patterns.

“Our outlook going forward has improved based on the strong demand signals we are seeing in the marketplace,” Harmit Singh, Levi’s chief financial officer, said in the statement as the company reported first-quarter earnings.

Net sales in the quarter ending Feb. 28 fell 13 per cent, Levi said. Its digital business was a bright spot, however, growing about 41 per cent compared to the same period the prior year. That revenue accounted for about a quarter of the company’s net sales for the quarter.