'Time of extraordinary spending is over': Finance Minister Chrystia Freeland on 2022 federal budget

The net cost of new measures in Thursday’s budget -- including revenue-raising steps -- are estimated at $31.2 billion (US$24.8 billion) over six years; some economists expected that number would be closer to $100 billion. Cumulative deficits through 2027 will be $50 billion lower than forecast in a December fiscal update, with revenue exceeding projections by about $90 billion over that time.

The budget is a recognition by the Liberal government that more fiscal caution is needed given rising inflation and global uncertainties that are clouding the economic outlook. It also marks a pivot for Prime Minister Justin Trudeau, who has faced heavy criticism over spending given federal debt levels have doubled since he came to power in 2015.

“Canada has a proud tradition of fiscal responsibility,” Freeland said in the prepared text of her speech to parliament. “It is my duty to maintain it -- and I will.”

Economists were anticipating the government would spend nearly all its additional revenue, expectations that were stoked by a power-sharing deal with the left-leaning New Democratic Party. Yet the pact may have actually given Trudeau’s government room to hold back, given it eliminated the likelihood of another election any time soon.

New spending appears to be just over $60 billion, while revenue from new taxes and repofiling of past spending will total about $30 billion.

The case for deficit financing is also getting more difficult with consumer price gains hitting a three-decade high and the economy running up against capacity, prompting calls from business groups for the government to curtail ambitions and focus more on growth initiatives.

“It’s a more responsible fiscal plan than most people assumed coming into the budget,” said Robert Asselin, a former Trudeau adviser who is now vice-president at the Business Council of Canada.

The budget doesn’t include funding for a universal prescription drug plan that was part of the NDP deal, as details of that program must still be worked out. Billions in health care spending the Liberals pledged in last year’s election are also not accounted for due to ongoing negotiations with provincial governments. 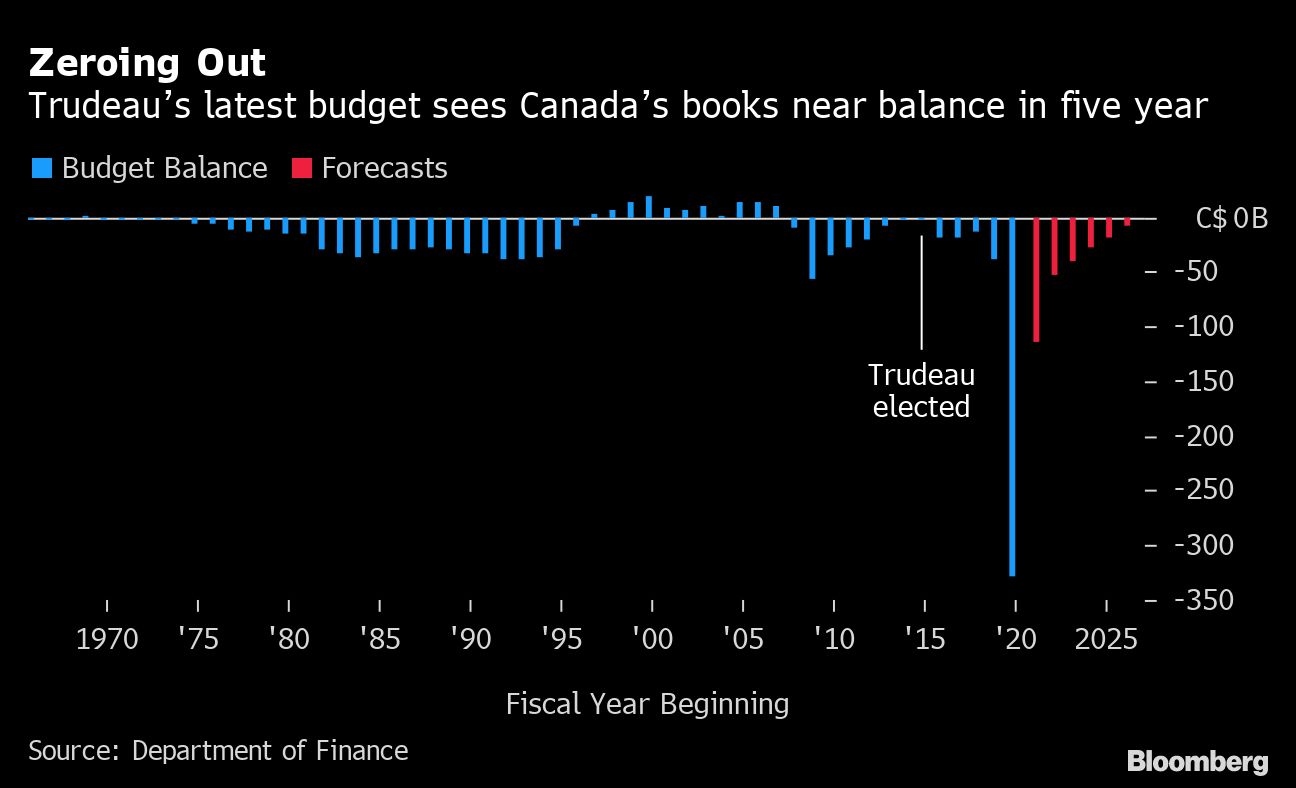 Freeland is also banking on more than $25 billion from a combination of new taxes on financial institutions, the elimination of loopholes and tax avoidance strategies, and a review of existing spending and programs.

The government is reallocating billions in funds that were already in the fiscal framework -- reflecting just how much money Trudeau’s government has spent over the past two years. Canada’s deficit hit a record $330 billion in 2020.

The shortfall for the fiscal year that ended in March came in at $114 billion versus estimates in December of $145 billion. The budget gap is now projected to fall to $8.4 billion by 2026. The ratio of debt to gross domestic product is seen falling to 41.5 per cent by 2026, from 46.5 per cent this year.

As promised in October’s election, the governing Liberals are attempting to rein in soaring house prices by curtailing demand through taxes on speculators and a freeze on home purchases by foreigners. The housing measures in the budget total $10 billion over six years, including a $4 billion accelerator fund that will give incentives to cities that create more supply.

Freeland delivered on a pledge to tax large banks and insurance companies, which will see a permanent 1.5 percentage-point-increase in their corporate income tax rate. Banks and insurers will also pay a one-time 15 per cent surtax on income above $1 billion for the 2021 tax year. Those measures are expected to raise $6.1 billion over the forecast horizon.

On defense, the budget pledges more than $8 billion in new funding over five years, though details are scant on how the bulk of the money will be spent. Continental defense and a boost to Canada’s cybersecurity capability both receive prominent mention, and the government also promises a further $500 million in military aid to Ukraine this fiscal year.

The budget includes a long-anticipated refundable tax credit for carbon capture technology, a crucial element of the Liberal government’s plan to cut greenhouse gas emissions in the oil and gas sector. The proposed credit is expected to cost $2.6 billion through the first five years, and $1.5 billion annually afterward.

Public dental coverage -- a key clause in the Liberal-NDP deal -- is budgeted at $5.3 billion over the next five years.

Many other health-care commitments made in the election campaign are yet to be budgeted. The platform included $4.5 billion over five years for a new mental health services, along with billions more in funding for family doctors, improved access to rural care, and wage support for personal support workers.

All of it is currently wrapped up in negotiations with provinces, and will have to be accounted for in future budgets if the Liberals follow through on it.