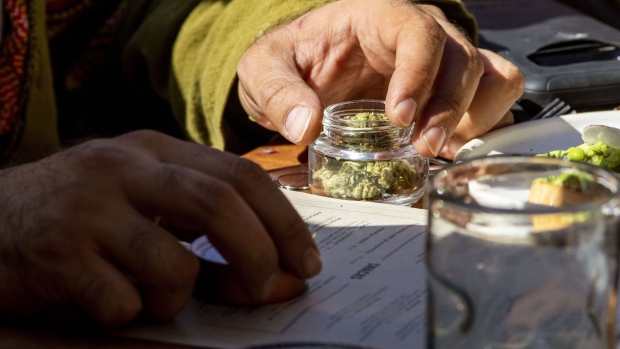 A customer holds a jar of marijuana at the Lowell Cafe, a new cannabis lounge in West Hollywood, California, U.S., on Tuesday, Oct. 1, 2019. , Bloomberg

Cannabis may not be quite as essential as toilet paper, but consumers rushed to stock up nonetheless amid fears of widespread store closures.

On March 16, sales of recreational cannabis were up 159 per cent in California compared to the previous year, jumped 100 per cent in Washington state and grew 46 per cent in Colorado, according to data from cannabis analytics firm Headset Inc.

There was a modest increase in the number of buyers but most of the jump came from bigger purchases: Washington consumers spent an average of $33.70 per basket, up 22 per cent from the prior week, Headset said.

Leaflink Inc., a wholesale marketplace, saw a similar trend with a 48 per cent increase in orders week-over-week as retailers restocked following a busy weekend. And online directory Weedmaps reported a 350 per cent spike in delivery and pick-up orders on March 16 versus the week before.

Interestingly, consumers seemed more focused on edibles than smokable products, perhaps because they’re conscious of the respiratory effects of COVID-19. Edibles orders increased by 18 per cent while flower orders fell 21 per cent, according to Weedmaps.

Whether the near-term spike in demand will last remains to be seen. Some jurisdictions, including New York, Nevada and San Francisco, have declared medical marijuana dispensaries to be essential businesses, meaning they can stay open even as other stores are forced to shut. However, recreational dispensaries are unlikely to get the same designation.

Conversations with management teams “point to near-term strength and medium-term uncertainty,” said Canaccord Genuity analyst Bobby Burleson. Most companies expect net lost revenue in the second quarter amid store closures, which will only be partially offset by growth in direct-to-consumer deliveries.

“The vice of choice when alone is cannabis. The vice of choice in large groups or with new people is alcohol,” Kirk said. “This doesn’t solve capital markets issues facing some companies, but it does bode well for the industry’s inventory problem. With facilities closing and demand increasing, inventory that has sat idly is starting to find a home.”