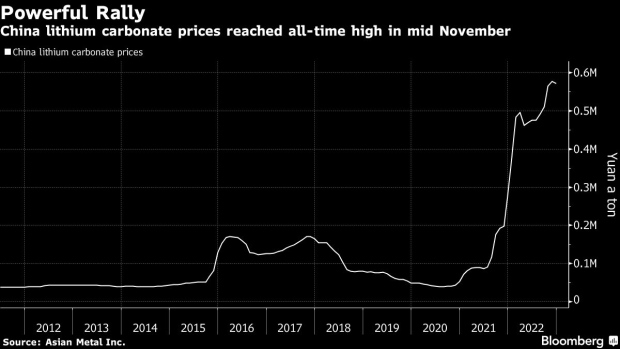 (Bloomberg) -- Lithium prices have already been on a monumental tear. But if there’s one thing that the industry’s top executives agree on it’s that there’s room to go even higher.

That’s partly thanks to President Joe Biden’s signature climate and tax bill known as the Inflation Reduction Act (IRA). A key piece of the legislation is focused on bolstering production and processing for critical battery metals like lithium within the US and with countries that have free-trade agreements with Washington.

Demand for lithium is “now being regionalized, and there’s more and more regional competition for that,” said Eric Norris, lithium president of Albemarle Corp., the world’s largest producer of the silvery white metal.

“Pricing is going to remain strong,” Norris said in an interview on the sidelines of Deutsche Bank’s 7th annual lithium and battery supply chain conference in New York. “Everybody needs lithium.”

The IRA’s local content provisions will encourage trade flows between the US and its free-trade partners, most of which will have “higher cost in some shape or form,” said Dale Henderson, chief executive officer of Pilbara Minerals Ltd. “It does provide increased price support. Any subsidy regime will help price support.”

In batteries for electric vehicles, there’s no substitute for lithium. As consumer demand surges for EVs, prices of lithium have skyrocketed to records. Production of the metal is barely keeping up with consumption after a 2018-20 market slump that undercut investment in new projects.

“We see policy changes in the form of legislation, both words and policies finally starting to take shape,” said Brindle, who also expects lithium prices to keep rising.

Other drivers that will keep lithium prices elevated are “continued exponential demand growth” from EVs and limited additional supply, according to Stuart Crow, chairman of Lake Resources NL.

Read more: Democrats Supercharged EV Investment While They Had the Chance

More than $13 billion of investment in battery raw material production and battery and EV manufacturing has been announced in the less than three months since Biden signed the IRA into law in mid-August, according to Bloomberg calculations. Northvolt said last week it’s considering postponing plans to build a battery factory in Germany and will decide next year between building the factory in Europe’s largest economy or expanding first in North America.

For Albemarle, “what the IRA’s done is probably reignite our M&A,” Norris said. The company is looking at targets in jurisdictions like Canada and Australia, which have free-trade agreements with the US, he said.

(Adds comments from Pilbara CEO in fifth paragraph and from Lake Resources chairman in ninth.)