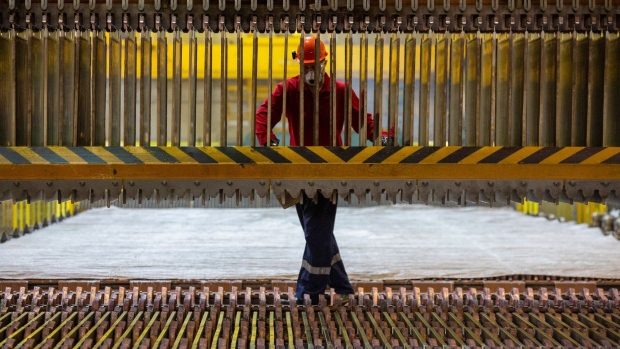 A worker inspects copper cathode and anode sheets in an electrolytic tank in the electrolysis shop at the Uralelectromed Copper Refinery, operated by Ural Mining and Metallurgical Co. (UMMC), in Verkhnyaya Pyshma, Russia, on Thursday, May 20, 2021. A rebound in the world’s largest economies as the vaccination against Covid-19 rolls out is stoking demand for metals, food and energy when supplies are still constrained, creating short-term shortages. , Bloomberg

(Bloomberg) -- The London Metal Exchange will restrict new deliveries of copper and zinc from Russia’s Ural Mining & Metallurgical Co. and one of its subsidiaries, after the UK sanctioned co-founder Iskandar Makhmudov.

The move is by far the most significant restriction on Russian supplies by the world’s main metals market since the invasion of Ukraine. Metals including copper, zinc and aluminum haven’t specifically been targeted by US or European sanctions, although there is an intensifying debate in the industry over whether the LME should act independently to block new deliveries of Russian material.

The LME said it is taking action because of its understanding that the UK government views Makhmudov as owning or controlling UMMC, which in turn controls Chelyabinsk Zinc. The company said in March that he was no longer a controlling beneficiary and had left the board, but didn’t give further details.

Starting immediately, metal from UMMC or its Chelyabinsk Zinc unit can only be delivered to LME warehouses if the owner can prove to the exchange that it won’t constitute a breach of sanctions, including that it was sold before Makhmudov was sanctioned by the UK on Sept. 26, and that neither company has any economic interest in the metal.

UMMC copper that is currently listed in the LME warehouse system is not subject to the sanctions, and there is no zinc produced by Chelyabinsk in LME warehouses, the exchange said.

The metals industry has been grappling with the question of how to handle Russian supplies since the invasion of Ukraine in February, and the debate has intensified in over the past month or so. Certain European buyers have been trying to avoid Russian supplies and some in the industry have expressed concern that big volumes of unwanted metal could be dumped onto the LME, depressing and distorting the global benchmark price.

The LME -- which previously said it didn’t plan to act outside of the scope of sanctions -- confirmed last week it was considering launching a discussion paper on whether to block new supplies of Russian metal from being delivered to its warehouse network.