The world’s biggest real estate investors are sitting on piles of cash, preparing for once-in-a-lifetime opportunities created by the pandemic.

With economies around the world sputtering, commercial real estate prices are expected to come down. How much they’ll fall is the key question.

Sellers are currently willing to concede discounts of around five per cent, while bidders are hoping for about 20 per cent off pre-pandemic prices, said Charles Hewlett, managing director at Rclco Real Estate Advisors. That estimated gap, which is likely wider in specific cases, has put a freeze on deals.

“The mantra for anything that hasn’t gotten started is: delay, defer and, in many cases, renegotiate,” Hewlett said. “If I’m going to have vintage May 2020 on my books, I want to be able to demonstrate to my investors that I got an exceptionally good deal.”

Private equity firms across the globe hold an estimated US$328 billion in dry powder for real estate deployment, according to the data firm Preqin Ltd. Prior to the crisis, asset prices had been pushed up as investors chased yield in riskier corners of the property market. Now, Blackstone Group Inc. and Brookfield Asset Management Inc., the largest real estate investing companies, are expected to hunt for bargains among the fallout from the pandemic.

For now, social distancing rules and a virtual travel halt have stalled transactions and led to speculation that prices will drop in coming months.

“The physical restrictions taking place are mostly preventing new deals from happening,” Tom Leahy, a London-based senior director at Real Capital Analytics Inc. said. “Far fewer active buyers, far fewer deals, an increase of deals falling out of contract -- those are the preludes to seeing prices fall when the market does come back.”

The volume of deals in Europe plunged 65 per cent in April from a year earlier, according to Leahy. U.S. and Asian markets faced similar drops.

Asia, where the pandemic began, is likely to recover faster than Europe or America, as Taiwan, South Korea, Japan and parts of China reopen for business, according to Richard Barkham, chief economist for CBRE Group Inc. Transactions in the Americas will fall an estimated 35 per cent this year, compared with a roughly 25 per cent decline in the Asia-Pacific region, he said. 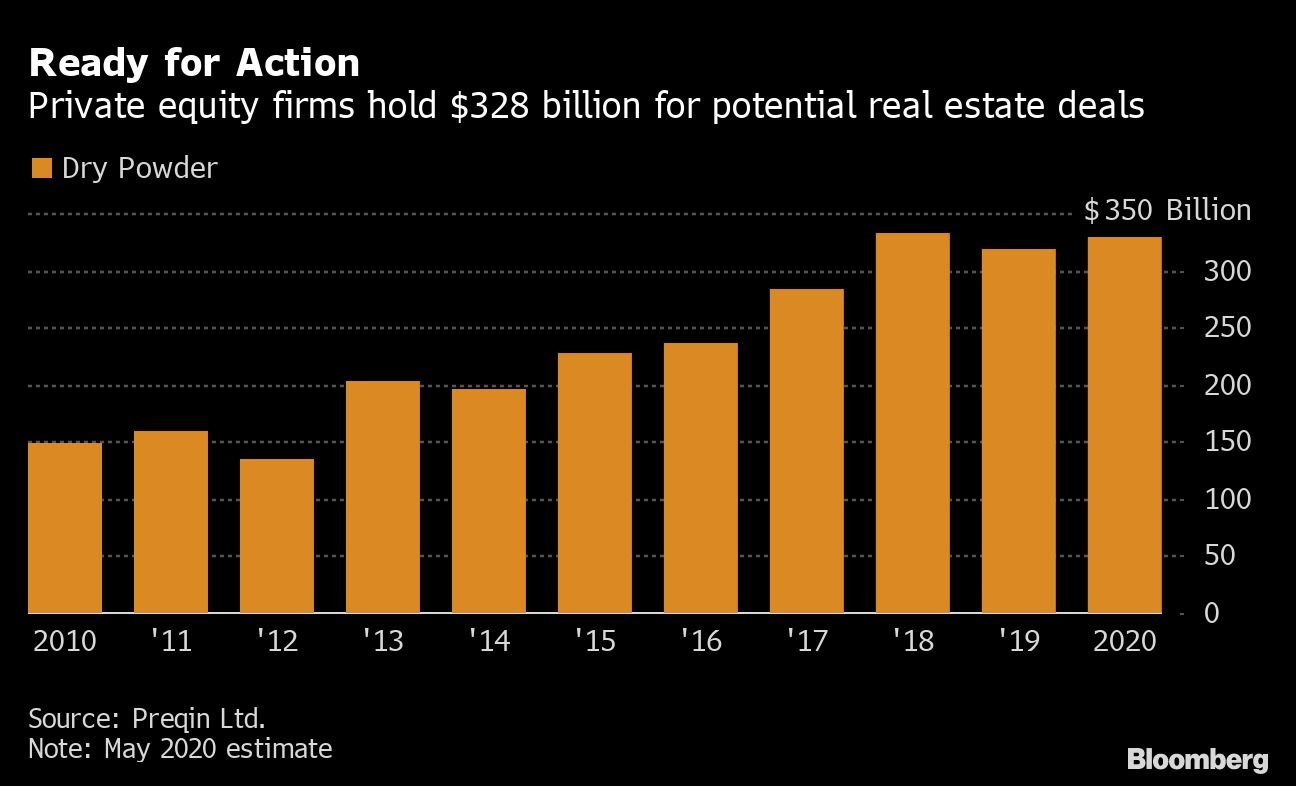 Still, New York-based Blackstone, which had US$538 billion in assets under management at the end of March, is “starting to see some rescue situations,” President Jonathan Gray said during an earnings call last month. He added that “distress takes time to play out.”

“In reflecting on what really matters to our business, it is liquidity, liquidity and liquidity, in that order,” he wrote in a letter to shareholders.

The firms with money to spend first have to figure out what do do with some of their more vulnerable recent investments. Blackstone said last month that its real estate portfolio, which represents about 30 per cent of its assets under management, is concentrated in “sectors that have shown greater resilience to Covid-related headwinds.”

Still, not all its bets look like winners. In late February, Blackstone announced a deal to buy a $6 billion portfolio of university dormitories in the U.K. popular with international students.

“Are they scratching their heads about having put money into the student business?” Chris Grigg, CEO of British Land Co., one of the U.K.’s largest commercial landlords, said. “You’d guess they probably are a bit.”

Brookfield made waves with a US$15 billion bet on malls in 2018. But with retail stores shuttered and more consumers shopping online, the company recently announced a US$5 billion retail revitalization program.

Until shopping, commuting and travel become routine again, it will be hard for investors to agree on what malls, hotels, offices and other properties are worth.

“Proof is really going to be when the markets start to reopen when buyers and sellers find a middle ground with what’s going to happen with pricing,” Real Capital’s Leahy said. “It’s going to be asymmetrical. Different sectors and different geographies are going to be factors. There’s not going to be a uniform recovery.”