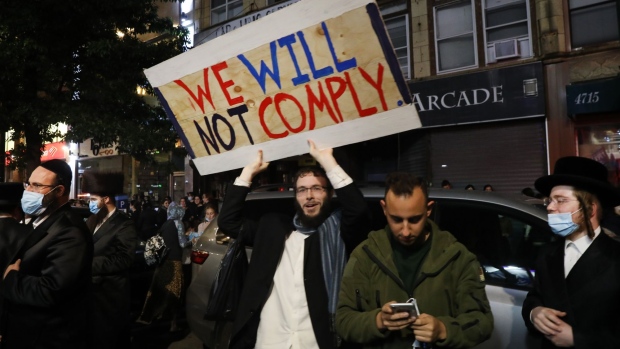 NEW YORK, NEW YORK - OCTOBER 07: Groups of protesters gather in the Brooklyn neighborhood of Borough Park to denounce lockdowns of their neighborhood due to a spike in COVID-19 cases on October 07, 2020 in New York City. Borough Park is one of numerous Brooklyn neighborhoods that are witnessing a rising number of COVID-19 cases as New York City continues to trend down to around a one percent overall infection rate. Many of the neighborhoods experiencing a spike in cases are Orthodox Jewish neighborhoods which have had issues with authorities in limiting large funerals and weddings. New York City Mayor Bill de Blasio has announced plans to close nonessential businesses and schools in nine neighborhoods where positive COVID-19 rates have been higher than 3 percent. (Photo by Spencer Platt/Getty Images) , Photographer: Spencer Platt/Getty Images North America

(Bloomberg Opinion) -- D.A. Henderson was a remarkable man. An expert in bioterrorism, dean of what is now the Johns Hopkins Bloomberg School of Public Health and frequent adviser to U.S. presidents, Henderson was best known as the man who eradicated smallpox in the 1970s. His knowledge of infectious diseases was unsurpassed.

In the mid-2000s, when the U.S. public health community was trying to devise a program to fight pandemics, Henderson, who died in 2016 at the age of 87, was in the thick of it. The 9/11 attacks had given rise to fears of bioterrorism, and President George W. Bush, having read John M. Barry’s book about the 1918 pandemic, “The Great Influenza,” was pushing public health officials to come up with a preparedness plan that could be put into action if a new virus took hold.

Some proposed interventions, such as frequent hand-washing, contact tracing and quarantining the sick, were uncontroversial. But one intervention was the subject of furious debate: lockdowns. They hadn’t been used as a pandemic response since the Middle Ages. On one side of the debate were the scientists who had been asked by the Bush administration to come up with the pandemic response. They favored lockdowns. On the other side was Henderson.

In a paper he wrote in 2006 with three colleagues, Henderson concluded that lockdowns were likely to do far more harm than good and would “result in significant disruptions of the social functioning of communities and result in possible significant economic problems.” What’s more, they added, there was simply no evidence that lockdowns reduced the toll of a contagious virus.

Henderson lost that debate, obviously. But now, seven months into the current pandemic, it would appear that the world is coming around to his point of view. The economic damage wrought by lockdowns has been immense. School closings have done incalculable damage to students, especially poor ones. This summer, some 20% of the U.S. workforce was on unemployment, according to Forbes. The question of whether lockdowns have saved any lives remains as unsettled today as it was in 2006.

Last week, Dr. David Nabarro, the World Health Organization’s special envoy on Covid-19, was interviewed by the U.K.’s Spectator TV. In the early days of the coronavirus, the WHO had been an important advocate of lockdowns, and much of the world followed its advice. Yet when the host, Andrew Neil, asked Nabarro about lockdowns, he replied:

We in the World Health Organization do not advocate lockdowns as the primary means of controlling this virus. The only time a lockdown is justified is to buy you time to reorganize, regroup, rebalance your resources, protect your health workers who are exhausted. … Look at what is happening to poverty levels. It seems that we may well have a doubling of world poverty by next year. We may have at least a doubling of child malnutrition. … Remember, lockdowns just have one consequence that you must never ever belittle, and that is making poor people an awful lot poorer.

Without acknowledging that this was a shift in its original position, Nabarro said that the WHO is now advocating what he called a middle path — “holding the virus at bay while keeping economic and social life going.” This would require a high level or organization by governments and engagement by citizens. It would mean significant contact tracing, isolating those who have come in contact with an infected person and taking mask-wearing and social distancing seriously. “If we can combine these steps,” Nabarro said, “we can get in front of it.”

No doubt he is right. Sadly, in the U.S. right now, getting that kind of government organization and buy-in by the populace is virtually impossible — not as long as Donald Trump is president and millions of Americans refuse to take even the most basic measure of wearing a mask. Even so, should there be a significant second wave of the coronavirus, another lockdown would be a terrible mistake. In addition to the economic damage and disruption it would cause, it would also bring about enormous resistance. And it would create even more distrust in the government’s pandemic advice. Just ask the people living in the New York hot spots that Governor Andrew Cuomo put into lockdown recently. They are in open revolt.

The truth is that using lockdowns to halt the spread of the coronavirus was never a good idea. If they have any utility at all, it is short term: to help ensure that hospitals aren’t overwhelmed in the early stages of the pandemic. But the long-term shutdowns of schools and businesses, and the insistence that people stay indoors — which almost every state imposed at one point or another — were examples of terribly misguided public policy. It is likely that when the history of this pandemic is told, lockdowns will be viewed as one of the worst mistakes the world made.

“Experience has shown that communities faced with epidemics or other adverse events respond best and with the least anxiety when the normal social functioning of the community is least disrupted,” Henderson and his colleagues wrote in that 2006 paper. “Strong political and public health leadership … are critical elements. If either is seen to be less than optimal, a manageable epidemic could move toward catastrophe.”

We should have been listening to him all along.