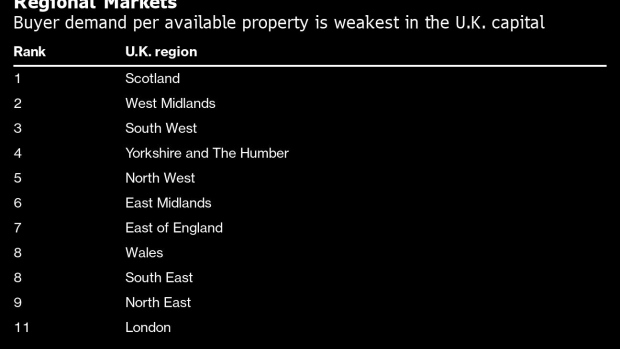 A pedestrian wearing a protective face mask walks past residential properties in London, U.K., on Friday, March 27, 2020. U.K. house sales are set to plunge by 60% in the next three months as the coronavirus outbreak batters the economy. Photographer: Hollie Adams/Bloomberg , Bloomberg

London’s housing market is set to underperform other regions of the U.K. for a third year, with the reshaping of the capital wrought by Brexit and the pandemic continuing to hold back demand in 2022, according to Rightmove.

In an outlook published Wednesday, the property website predicted asking prices in London will increase 3%, lower than the 5% gain expected for the country as a whole. Competition for homes in the city of 9 million people is trailing every other region.

The projections reflect the shift in market dynamics since the 2016 vote to leave the European Union. Brexit and increased taxes put off overseas buyers, and tens of thousands of migrant workers left the country when Covid-19 closed swathes of the economy. Meanwhile, the freedom to work from home has led many city dwellers to seek properties away from urban centers with enough space for an office.

“While London overall will continue to be a price drag on the national average, there will be hotspots and cooler spots as its own unique and diverse markets continue to operate at different speeds,” said Tim Bannister, Rightmove’s director of property data.

For the U.K. market as a whole, next year is likely to be “less frenzied” than in 2021 due to stretched affordability after the “race for space” and a temporary tax cut on purchases sent property values to record levels. Areas offering value for money such as the West Midlands and parts of northern England will see gains of around 7%.

The slowdown is forecast to be more pronounced in the second half, with Rightmove predicting that buyer sentiment will be hit rising interest rates, higher inflation and a payroll tax hike due to take effect in April. More homes are expected to be put up for sale, easing the acute squeeze on supply, it said.

In a separate report, the Confederation of British Industry said that strong global demand and supply-chain disruptions continue to put upward pressure on prices. Manufacturers expect to raise prices by 2.8% in the next quarter alone, a survey record, and the increase is feeding through to the cost of goods in stores.

An index of growth in the private sector remained around levels posted since coronavirus restrictions were lifted in the spring, and only a modest slowdown is forecast over the next three months, the business lobby said.