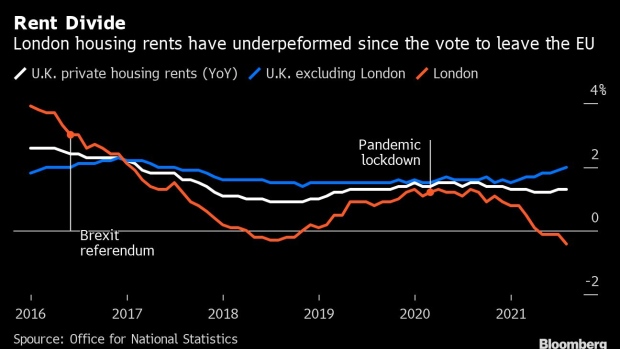 Estate agents' signs advertising properties to let stand in front of terraced houses in London, U.K., on Monday, Oct. 31, 2016. London property prices are set to fall next year as uncertainty about Britain's exit from the European Union damps the U.K. housing market, according to the Centre for Economics and Business Research. , Bloomberg

(Bloomberg) -- London property rental values fell at the sharpest annual pace in more than a decade in August, adding to evidence of a shift away from living in urban areas during the pandemic.

The 0.4% drop in the price of letting a home in August was the sharpest since 2010, the Office for National Statistics said on Wednesday. Excluding the capital, rents in the rest of the country climbed 2% last month.

After 18 months of restrictions to control the coronavirus, consumers are bidding more to buy larger houses with outside space and room for an office. They’re anticipating flexibility to work from home more often will remain long after the pandemic is finished. That’s boosted property prices and rents in far-flung areas such as Northern Ireland and Cornwall and cut them in London.

London’s drop in rental values “reflects a decrease in demand, partly because of the adaptation of remote working meaning that workers no longer need to be close to their offices,” the ONS said in a statement. “It also reflects an increase in supply, such as an excess supply of rental properties as short-term lets change to long-term lets.”

A separate report from the ONS showed the pace of property price growth slowed in July as the government reduced a tax break on purchases. Prices rose 8% from a year ago, down from 13.1% in July.

More up-to-date surveys such as one by the mortgage lender Nationwide Building Society suggest price growth is slowing, with a decline in July followed by a rebound in August.