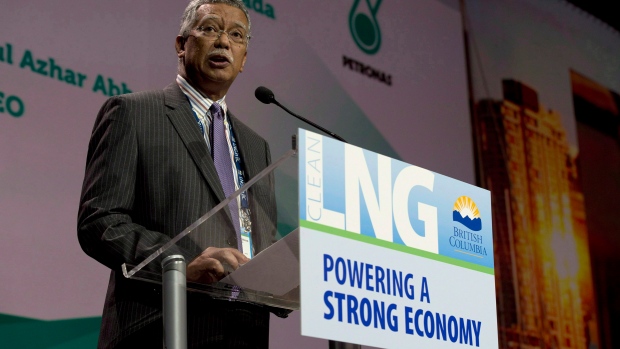 Petronas, as the company is known, is weighing options for the project as a more than 50 per cent slide in crude oil prices since the middle of 2014 has hit the group's profits and prompted cuts to capital expenditure and jobs.

Amid the cost-cutting, the economics of the B.C. project - which took three years to get approval due to environment concerns - have been called into question as LNG prices have fallen more than 70 per cent in two years.

Petronas was given the go-ahead for the project by the Canadian government earlier this week. It said then that executives would study the 190 conditions imposed by the authorities and conduct a review before deciding on the next steps.

Petronas said on Friday it will not provide any additional comment when asked about the potential sale.

The sources said Petronas has been considering a sale for months, after it became apparent that a Canadian approval was possible, but had yet to take a final decision. Other options are also being considered, including putting it on ice.

"They are going to be looking at gas prices, costs and returns before they make the final decision," said one of the sources. "It is a very tough call."

The Canadian project is Petronas' biggest foreign investment and seen as a sign of Malaysia's global energy ambitions. An exit would underscore the financial constraints at the state-run firm and also the soft outlook for LNG prices.

Last month, Petronas reported an 85 per cent slide in second-quarter profit and labeled the industry outlook "gloomy" well into 2017. It has committed to paying 16 billion ringgit to the government coffers this year, down nearly 40 per cent from its year-ago contribution.

Petronas signed on for the project in 2012 through the acquisition of Canada's Progress Energy.

It has faced several hurdles. Aboriginal and environmental groups have said the project would threaten a salmon habitat. The LNG price decline added to concerns, also a growing supply glut as other projects went live.

Petronas goes ahead with a sale, finding a buyer in current market conditions would be difficult, the

Petronas was considering its options as far back as a year ago, a separate industry source said, but he added it would be difficult to sell in the current environment given that Canadian projects are more expensive.

If Petronas opts to suspend the Canada project, it would be put on ice until gas prices begin to turn around and Petronas is confident of securing long-term contracts at reasonable prices, said the sources, who declined to be identified as the negotiations are not public.

Other LNG projects in British Columbia have also faced delays, underlining the market outlook. In July, Royal Dutch Shell and its partners pushed back a decision on building an LNG export terminal, and Chevron has delayed the scheduled 2017 start of its Kitimat LNG project.

Petronas has minority partners for the project in China, India, Japan and Brunei.