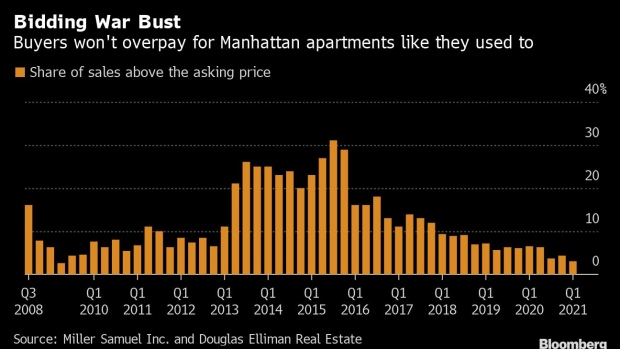 The lower Manhattan skyline is seen from the Madison House condominium at 15 East 30th Street in New York, U.S., on Monday, Oct. 28, 2019. Madison House, a 800-foot condo building is the tallest in Manhattan's NoMad neighborhood. But its developers aren't reaching for the sky on pricing. , Bloomberg

(Bloomberg) -- Manhattan homebuyers are coming back to the market they left a year ago. Just don’t expect them to overpay.

Apartment purchases climbed 2.1% in the first quarter from the same three months in 2020, according to a report Friday by appraiser Miller Samuel Inc. and brokerage Douglas Elliman Real Estate. It was the first time in four quarters that sales topped the year-earlier period, marking a long-awaited spark for a market that’s lagged behind every other part of the New York region.

Buyers priced out of the city’s costliest borough before the pandemic are sensing opportunity and committing to Manhattan if they can find a place that meets their budget. Current residents are seeing chances to upgrade for less. And all of them are insisting on a deal. Of the 2,457 homes that sold in the quarter, 97% closed at or below the asking price, the highest share since 2009, according to the report.

“If they negotiate a deal, they’re going to sign,” said Steven James, chief executive officer of Douglas Elliman’s New York City office. “And if they’re not going to get a deal, or if the sellers are still unreasonable, they’re not going to buy. There are a lot of offers being placed, but not all the offers are being accepted.”

Entry-level buyers were well represented. Units priced from $1 million to $3 million accounted for 40% of all purchases in the quarter -- an all-time high, the brokerage Compass said in its own report.

Some neighborhoods offered better chances for bargains than others, given their diminished appeal to buyers in the middle of a pandemic that’s reordered how people live and work. The biggest condo discounts in the quarter -- 14% on average -- were offered in Midtown East, a district heavy with office skyscrapers that have been largely empty for a year, according to a report by the brokerage Serhant.

The median price of completed deals in that neighborhood fell 12% to $1.3 million, Serhant’s report said. In Midtown West, the median fell 19% to $1.04 million.

“One of the main appeals of living in Midtown is its proximity to offices,” Garrett Derderian, Serhant’s director of market intelligence, said in a statement. “If you are looking to negotiate the best deal, that’s the place to go.”