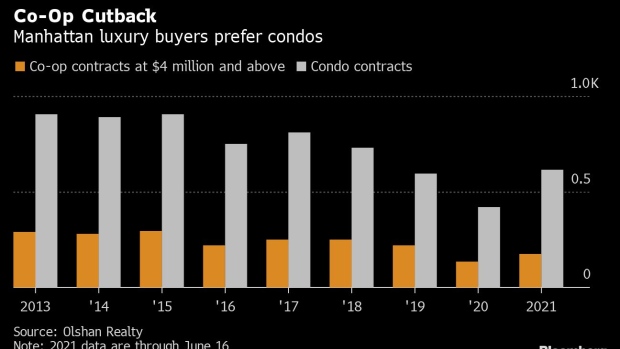 (Bloomberg) -- Luxury homebuyers are on a shopping spree in Manhattan. And they’re largely avoiding co-ops.

Just 177 co-op apartments priced at $4 million or higher went into contract this year through June 16, according to data from brokerage Olshan Realty. That compares with 615 condo deals in that category during the same period.

Manhattan’s high-end real estate market is on a sales streak this year, as the elite see opportunities for discounts amid a mountain of supply. While well-heeled buyers once sought the status that comes with acceptance into the city’s most exclusive co-ops, they’re now favoring newly developed condo buildings with better amenities, and no lifestyle restrictions or intrusive financial questioning.

It’s a preference that’s been building for years, along with a boom in luxury condo construction that’s made more choices available. And that’s fast eroding the value of some of the most storied real estate in town, brokers say. Not even pedigreed co-ops like 740 Park Ave. are immune. Former U.S. Treasury Secretary Steven Mnuchin had to whittle at least 21% off the price of his apartment there to find a taker last month.

“The buying pool is starting to value co-ops like used cars,” said Donna Olshan, president of the brokerage that bears her name. “They’re not new, and in order to get in and out, you’ve got to deal with a co-op board. If they’re spending millions of dollars, they want to be able to buy and sell freely, not have that tied up by a shadow government.”

Co-op buyers don’t purchase their units outright but instead acquire shares in a corporation that owns the building. The governing boards of those corporations, responsible for ensuring their properties are fiscally sound and pleasantly livable, set rules on everything from how much cash residents need to have in the bank to when they can renovate their kitchens and how much their dogs can weigh.

They also have wide latitude to determine who may live there -- and who may not. And when boards reject buyers, they don’t give a reason, a practice that’s drawing extra attention at a time of heightened sensitivity to all notions of discrimination.

Efforts by state lawmakers to compel co-op boards to make their secret dealings more transparent failed to advance before the legislature adjourned this month. But Westchester County -- where as many as 15% of co-op buyers have been rejected since the end of 2018 -- is poised to pass its own law requiring boards to offer written explanations for each turn-away, said Richard Haggerty, chief executive officer of the Hudson Gateway Association of Realtors.

Absent any clear guidance on how boards make their decisions, buyers and their agents are left to speculate.

“You’re dealing with this black hole,” said Jacky Teplitzky, a broker with Douglas Elliman Real Estate who guides buyers through the co-op approval process. “You’re waiting, you don’t know what’s happening, you don’t know what they’re looking at. They ask some questions. And then based on those questions, you’re in a guessing game: ‘Oh, maybe they’re concerned about this.’”

The result is diminished demand and a hit to potential value, Olshan said. The average price of luxury co-ops that found takers this year was $7.15 million, compared with $8.37 million for condos in a similar price range, according to her firm’s data on listings at $4 million and above.

It took Mnuchin two and a half years and several price cuts to sell his duplex co-op apartment at 740 Park Ave., one of the Manhattan’s most mythic and exclusive addresses. The five-bedroom unit was first listed in September 2018 for $32.5 million, and found a buyer last month after the asking price was reduced to $25.75 million.

“I study the market,” Olshan said. “And the market is certainly not rewarding the co-ops.”