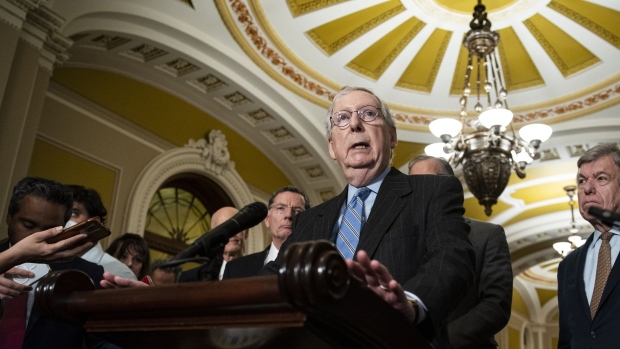 Senate Minority Leader Mitch McConnell, a Republican from Kentucky, speaks during a news conference following the weekly Republican caucus luncheon at the US Capitol in Washington, DC, US, on Tuesday, Nov. 29, 2022. A short-term stopgap funding bill to delay a December 16 shutdown deadline appears increasingly likely as negotiators have made little concrete progress toward a full government funding package. , Bloomberg

(Bloomberg) -- The top two Senate Republicans distanced themselves from Donald Trump, following the former president’s dinner with a white supremacist leader and the GOP’s poor showing in the midterm elections.

Senate Republican leader Mitch McConnell said Tuesday anyone who meets with people who espouse antisemitic or White supremacist views was “highly unlikely to ever be elected president of the United States.” Though he never mentioned Trump by name, the reference was clear.

“There is no room in the Republican Party for antisemitism and White supremacy,” McConnell said at his weekly news conference.

South Dakota’s John Thune, the No. 2 Senate Republican, told a panel of Bloomberg reporters and editors in Washington that his party shouldn’t be centered on one person and should welcome a new generation of leaders. The party’s poor showing in the November election demonstrated that independent voters and some moderate Republicans were turned off by Trump, he said.

The comments from two of the most powerful Republicans signal a growing divide between GOP leadership and Trump, who announced earlier this month that he plans to seek the presidency again in 2024.

“If we’re just tied to an individual and that’s what it’s all about, that’s not a very durable, enduring message,” Thune said.

Republicans’ rebuke of the former president has grown louder after Trump recently invited Ye, the rapper formerly known as Kanye West, to dinner at Mar-a-Lago, and he brought Nick Fuentes. Both Ye and Fuentes have publicly denigrated Jews, and Fuentes has also espoused racist views. Trump said he didn’t know Fuentes was coming, but the three men had dinner in the public areas of Trump’s Florida estate.

Thune said his party is “evolving” and “in transition”, but declined to endorse a specific person to run for president. He said that South Carolina Senator Tim Scott “offers a lot” and should be considered and that Florida Governor Ron DeSantis has shown he can be a prolific fundraiser. He also said potential candidates, including Mike Pompeo, Mike Pence and Nikki Haley, have bases of support.