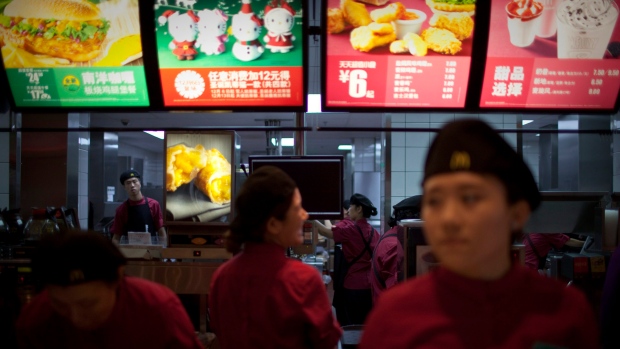 Employees prepare to serve customers at a McDonald's in central Beijing Wednesday, Dec. 15, 2010. , The Canadian Press

SHANGHAI - U.S. fast food giant McDonald's Corp (MCD.N) is getting a name change in China - at least on paper.

The firm will change its registered business name to "Golden Arches (China) Co Ltd", a spokeswoman confirmed to Reuters on Thursday, adding though that its brand name in China - a transliteration of McDonald's - would be unchanged.

The shift comes after the chain agreed earlier in the year to sell most of its China and Hong Kong business to CITIC Ltd and Carlyle Group (CG.O). The business plans to nearly double the number of its outlets in mainland China to 4,500 by 2022.

"It will still be clearly 'McDonald's' when diners come to our stores," the chain said on its official China microblog.

"Our restaurant name will remain the same, the change is only at business license level," spokeswoman Regina Hui added in emailed comments to Reuters. She declined to comment further on the reason for the change.

McDonald's in China and Hong Kong is 52 per cent owned by CITIC, while Carlyle has a 28 percent stake. McDonald's itself retains a 20 per cent interest in the business.

The structure is aimed at improving sales at existing stores and expanding outlets. Fast-food firms including McDonald's and rival Yum China's (YUMC.N) KFC are bouncing back from a series of food-supply scandals in China that had dented performance.

McDonald's reported robust sales on Tuesday, including better-than-expected growth in the United States and strong performances in Canada, Britain and China.