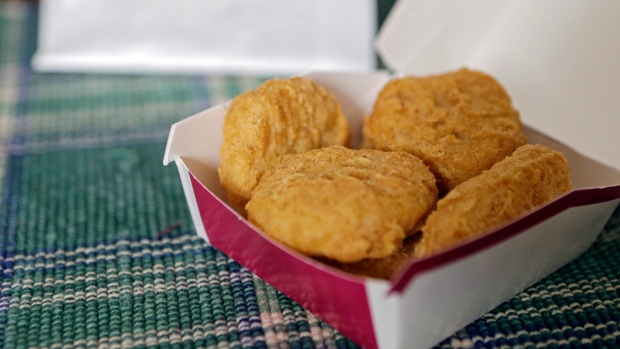 An order of McDonald's Chicken McNuggets is displayed for a photo in Olmsted Falls, Ohio , The Associated Press/Mark Duncan

Members of the Interfaith Center on Corporate Responsibility (ICCR) have filed shareholder resolutions at each of the companies, ICCR said in a statement on Thursday.

If the resolutions are not successfully challenged by the companies, they will come up for vote at the companies' next shareholders meetings.

ICCR members, alongside other campaigners, have had previous success in convincing most U.S. chicken producers to stop using medically important antibiotics.

Scientists and public health experts for years have warned that the regular use of antibiotics to promote growth and prevent illness in healthy farm animals contributes to the development and spread of drug-resistant superbugs that can infect people.

The Benedictine Sisters also want restaurant chain Denny's to make a "starter" commitment to reduce the use of such drugs in its chicken supply, said Nadira Narine, senior program director at ICCR.

McDonald's and Denny's did not immediately reply to requests for comment.

ICCR member As You Sow is pressuring Sanderson Farms (SAFM.O) to shift its stance on antibiotics. Sanderson is the only large U.S. chicken producer that has not committed to curbing the use of the drugs.

A similar proposal at Sanderson's annual meeting in February 2017 received the backing of around 30 per cent of shareholder votes.

In the past, the low-cost chicken producer has said that the preventative use of antibiotics in food animals has not been shown to harm human health.