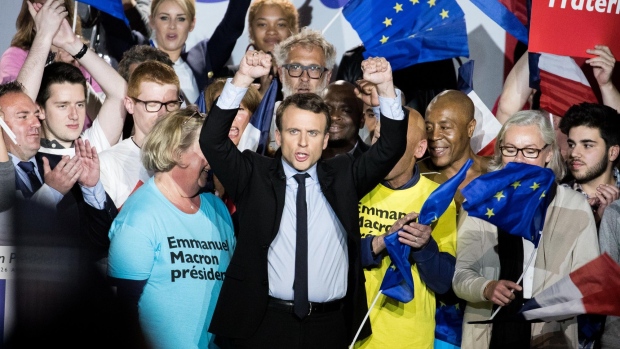 Emmanuel Macron, French presidential candidate, cheers during an election campaign event in Arras, France, on Wednesday, April 26, 2017. Macron returns to the campaign trail Wednesday after widespread criticism that a victory dinner he offered his team Sunday was premature and inappropriate given the deep divisions in the country. Photographer: Christophe Morin/Bloomberg , Bloomberg

The case which was opened in March has been passed on to investigative judges with wider probing powers, according to the daily French newspaper. They will also look into the conditions under which public tenders were awarded to McKinsey, Le Parisien reported, citing unidentified sources.

Representatives for McKinsey didn’t immediately respond to request for comment.

Authorities widened the case last month, based in part on complaints from elected officials, adding two lines of inquiry, French prosecutor Jean-Francois Bohnert said in an emailed statement. The first is looking into financial irregularities linked to consultancy work in campaign accounts during the 2017 and 2022 elections while a second was opened to examine allegations of favoritism, Bohnert said in the statement. He didn’t specify which campaigns were being investigated and no one answered a call for additional comment.

A spokesman for Macron’s office said they were aware of the prosecutor’s statement and that it was up to judicial authorities to conduct their investigation with full independence.

Macron has been ensnared in the McKinsey controversy since the French Senate released a report over the use of private consultants by his government in March. Consulting companies had wide-ranging influence over government decisions, the report said, prompting accusations that Macron had wasted taxpayer money and served his own interests in the process.

McKinsey’s Paris offices were raided by police in May while the probe was still focused only whether the US consulting firm paid any French corporate taxes in the last decade despite earning millions of euros on government projects.

McKinsey has previously said it adheres to French tax and social-security rules and is surprised by the focus on the company since it earned just 1% of all spending on consultancies by the country’s administrations.

--With assistance from Ania Nussbaum.