This is not the end of the cycle, we're not heading into a bear market or recession: John Zechner

Retail investors who fueled a basket of meme stocks to meteoric heights are getting pummeled by a risk-off environment and waning enthusiasm for their favorite high-flying stocks.

The group of 37 so-called meme stocks tracked by Bloomberg fell 0.5 per cent on Monday, marking a sixth straight decline, after its worst week since late February. The basket’s longest losing streak since taking Wall Street by storm comes as the spread of the delta variant sparked concerns about the future of global economic growth.

The recent selloff signals the end of the latest chapter to the meme mania where amateur investors are faced with the reality of investing in companies tied to chatroom hype instead of fundamentals. 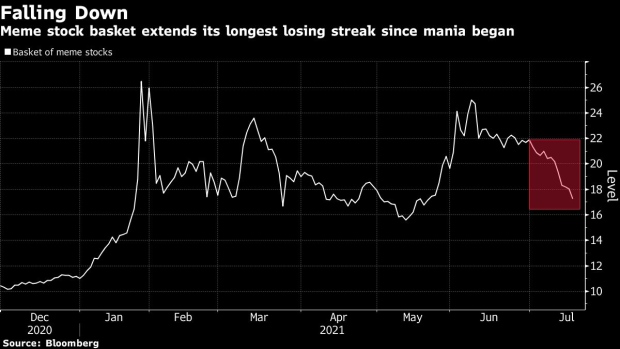 While investors who bought shares of AMC Entertainment Holdings Inc. and GameStop Corp. at the start of the year are sitting on massive gains, the same can’t be said for traders who piled into hot-then-not stocks such as Chamath Palihapitiya-backed Clover Health Investments Corp. and Hims & Hers Health Inc. With the latest unwind, top performers and cult favorites like AMC Entertainment have gone from leaders to laggards among the group.

AMC Entertainment has dropped 25 per cent and GameStop is down 9.3 per cent over the past six days, while Express Inc., Zomedica Corp., The9 Ltd are each down more than 15 per cent.

Shares of GameStop, often seen as icon of retail trading, took a hit last week after a Bloomberg News report that Netflix Inc. was planning to expand into the video games business. The video-game retailer slumped as much as 5.7 per cent amid concerns that another direct-to-consumer offering would lead to gamers simply download digital copies instead of heading to GameStop locations or shopping on their website.

While some were quick to downplay the risk, Wedbush analyst Michael Pachter said the video-streaming giant’s efforts are likely to be “all mobile,” GameStop shares were hit nonetheless and are trading near the lowest in two months.

AMC Entertainment remains the group’s best performing stock this year and has skyrocketed over 1,500 per cent, nearly double the gains seen in GameStop. Despite the massive rally this year, the stock has shed nearly a fifth of its value in the past week alone and is at less than half of its all-time high reached last month. AMC rebounded to drop just 1 per cent after initially stumbling as much as 11 per cent Monday as the surge in COVID cases dragged reopening stocks lower.

Trading volume for AMC has dried up with 614 million shares changing hands last week, a far cry from the more than 2 billion seen in late May and early June. On the options front, trading of far out-of-the-money calls, something that helped fuel recent surges, have fallen by the wayside with total option volume sitting at roughly a quarter of the peak seen last month.

Millions of movie watchers have also been streaming new movies like “Black Widow” and “Space Jam 2” online, staying away from cinema theaters.

AMC’s bonds also lost steam in recent weeks along with shares, and were among the top decliners in the U.S. high-yield market on Monday. The company’s 12 per cent notes due 2026 fell the most since February, dropping 5 cents on the dollar to around 85.5 cents, according to Trace bond trading data. Those notes were trading above par just last month.

The malaise is becoming increasingly visible for one-off meme stocks that see huge gains evaporate. Newegg Commerce Inc. has erased more than 60 per cent of its value in less than two weeks after soaring 287 per cent over three days.