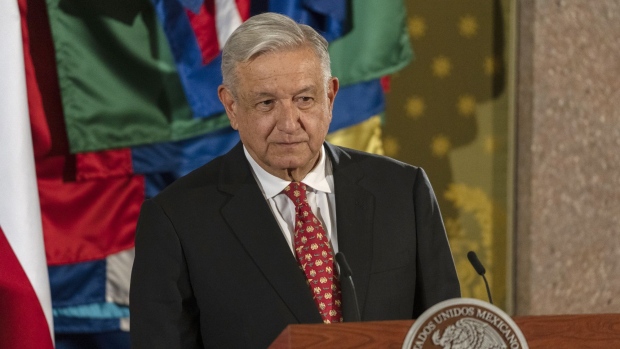 The new legislation, which was presented a few hours before its early Wednesday approval, reduces the number of offices within the electoral body, known as INE, the president said. It also gives the federal government greater budgetary control over the agency, according to Reforma newspaper. It now heads to the senate for discussion.

AMLO, as the Mexican president is known, had initially tried to wrest power from the regulator through a constitutional reform. That attempt failed to achieve the two-thirds majority needed when it was put to vote earlier on Tuesday.

Yet lawmakers immediately agreed to begin debating the second bill, which only requires a simple majority, that AMLO’s Morena party holds in both houses of congress together with allies. The move is likely to be challenged in courts as the opposition sees it as a way to try to bypass the constitution.

“We didn’t have that majority needed to reform the constitution,” the president said Wednesday morning during his daily press briefing. “The reform that only requires a simple majority was already approved but it’s limited because it can’t contradict what it’s in the constitution.”

The push to overhaul Mexico’s electoral regulator in a country with a history of voting fraud is one of AMLO’s most polemical initiatives given its closeness to the 2024 presidential election. Last month thousands of protesters marched in Mexico City against the president’s strategy to redo the INE, as the regulator is known, saying it would be a blow to free elections and amounts to a power grab by the president.

AMLO argues the INE has become too partisan and the cost of elections too high.

The new bill allows Mexicans abroad to vote online, lays the foundations for electronic voting more broadly, and ends the use of e-wallets that were allegedly used to buy votes, Interior Minister Adan Augusto Lopez said Wednesday at the same press briefing.

The senate will study the bill and won’t rush to vote on it, the upper chamber’s majority leader Ricardo Monreal said Wednesday, according to El Universal.