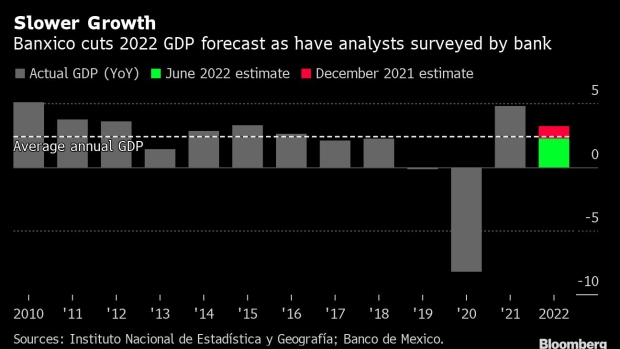 Mexico’s central bank is expected to speed the pace of interest rate increases, hiking borrowing costs by the most in recent times, with inflation stuck near a two-decade high.

Banco de Mexico, known as Banxico, is seen raising its key interest rate on Thursday by 75 basis points to 7.75%, the highest in almost three years, according to all 27 economists surveyed by Bloomberg. It’d be the biggest single rate increase since the central bank adopted the inflation target policy in 2008.

The 75 basis-point rise would also match the move by the Federal Reserve last week, the biggest withdrawal of monetary stimulus in the US since 1994. Both countries are reeling from inflation that’s well above their respective targets and Banxico tends to move in tandem with its northern neighbor to avoid sudden outflows of capital.

“Looking ahead, Banxico is likely to continue matching the Federal Reserve’s moves over the rest of this year in order to maintain financial stability. High inflation and inflation expectations also support additional hikes and a hawkish monetary policy outlook.”

Mexico’s central bank had set itself apart from other monetary authorities in Latin America by lowering rates slowly at the start of the pandemic, then easing into a hiking cycle started a year ago that included four consecutive 50 basis-point increases since December. That compares to increases of as much as 150 basis points in Brazil earlier this year.

Banxico’s five board members now seem ready to accelerate the pace of tightening after Deputy Governor Irene Espinosa broke ranks in May to vote for a 75 basis-point increase. Her colleague Jonathan Heath subsequently said he expected the board to hike by that magnitude at the June meeting.

“My very personal opinion: I think there will be a majority and we will see this increase of 75 points,” Heath said June 10. “The fundamental decision will be whether in August we will continue to boost 75 or we return to 50” basis points.

Thursday’s decision will be published on the bank’s website at 1 p.m. local time in Mexico City together with a statement from its board.

These are the other points to look out for:

Consumer prices rose 7.65% last month from a year earlier, staying close to the 21-year high registered in April and more than double the central bank’s target of 3% -- plus or minus 1 percentage point.

Banxico’s most recent survey of economists suggest that headline inflation will be 6.88% by the end of 2022 and 4.40% by the end of 2023, heading toward its 3% target only by early 2024. More worryingly, core inflation has accelerated for 18 consecutive months to 7.28% in May and economists see it still above 4% by the close of next year. Since it excludes volatile items such as fuel, it is a metric of how lasting price rises might be.

The bank on Thursday will present fresh estimates for both headline and core inflation, with current projections not seeing either of them back to target before 2024.

Banxico’s upcoming decision is largely seen as an effort to signal to investors that it’s prepared to be hawkish after not achieving a significant slowdown of inflation despite the yearlong tightening cycle.

Pamela Diaz Loubet, Mexico economist at BNP Paribas, pointed out that the board gave forward guidance in its May statement and members have been open about their willingness to raise interest rates faster if circumstance requires.

Banxico watchers will be on the look out for additional forward guidance in the statement accompanying Thursday’s decision.

Latin America’s second-largest economy has managed only sluggish growth despite record exports to the US, Mexico’s main trading partner, a dynamic that concerns analysts. President Andres Manuel Lopez Obrador compared the economy to a car earlier this month, saying that repeated hikes could prevent over-heating but might shut off the motor, in a veiled criticism to the strategy of the independent central bank.

Given the mediocre growth, some economists question how far Banxico’s tightening policy can go without becoming a drag on the economy, as Lopez Obrador says. Others see Thursday’s increase as the possible start of an even more aggressive cycle.

“I wouldn’t rule out that this year Mexico’s benchmark rate could reach its highest point ever, at 10%,” Gabriela Siller, director of economic analysis at Banco BASE, said from Monterrey.