Microsoft Corp.’s purchase of Activision Blizzard Inc. is bogged down, yet some traders are betting the deal ultimately will go through. If they’re right, there’s serious money to be made, given that the videogame company’s shares are still almost 20 per cent below the offer price.

Stricter US antitrust regulators, the series of international approvals needed, a broad slump in technology stocks and the size of the US$69 billion deal have all contributed to keep the gap between Activision’s price and Microsoft’s US$95-a-share bid stubbornly wide. That’s made it one of the most potentially lucrative opportunities for arbitrageurs who speculate on acquisitions. 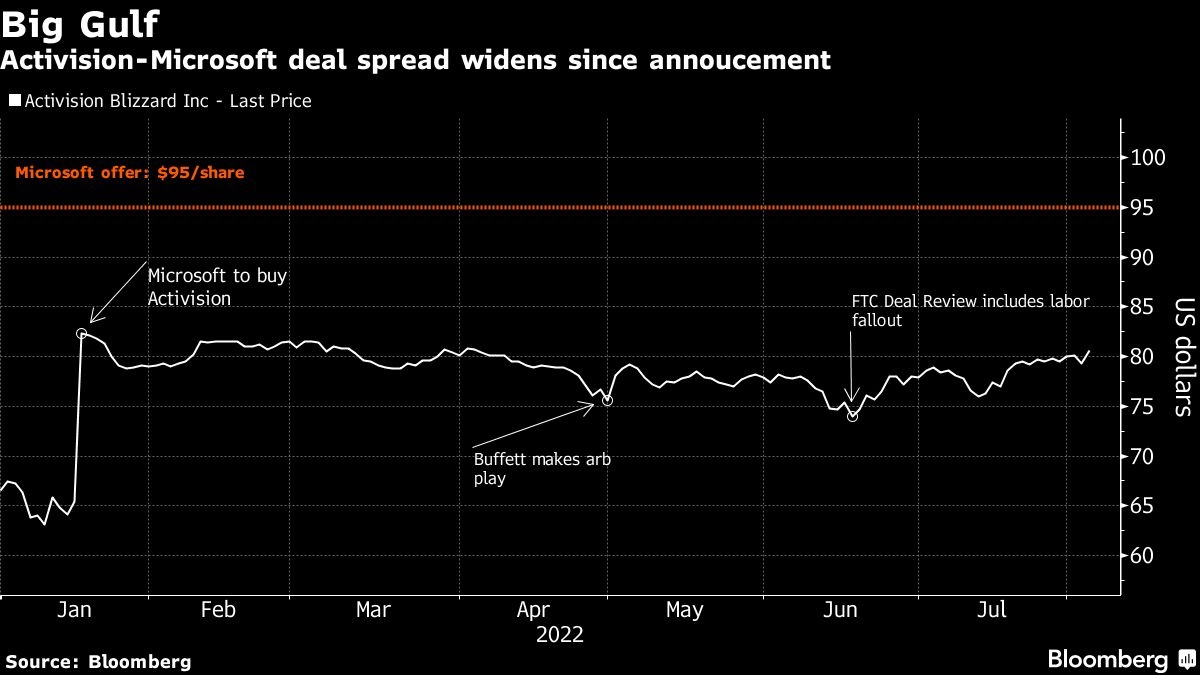 The heightened attention that US regulators are paying to big companies, especially in technology, has resulted in a longer period between when a deal is announced and when it finally goes through, raising the risk of a transaction falling apart.

Microsoft announced the Activision acquisition in January and has said it expects to complete it in the year ending June 30, 2023. And Broadcom Inc. has said it aims to wrap up its US$61 billion takeover of VMware Inc., announced in May, by October 2023.

Averaged annualized US deal spreads, which offer a gauge of the risk of transactions collapsing, have jumped above 15 per cent from about 10 per cent at the beginning of the year, according to data from Susquehanna International Group. That came amid rising fears of deal collapse or repricing, and higher costs to carry risky positions.

To be sure, one of the widest arbitrage spreads in technology mergers has nothing to do with regulatory hurdles.

Elon Musk is trying to walk away from his US$44 billion acquisition of Twitter Inc., and the company is suing him to force completion of the deal. Twitter shares are trading at US$41 versus the deal price of US$54.20, offering a 32 per cent gain if the transaction goes through as agreed.

Under the stewardship of Lina Khan, the Federal Trade Commission has already sued to block two major takeovers. She’s advocated for a more forceful approach to reviewing large technology deals, arguing that companies in the industry can use their dominance in one line of business to gain power in other markets.

The slump in the tech sector also hasn’t helped with deal spreads. The Nasdaq 100 Index is down 19 per cent this year, forcing investors to price in a greater downside risk to Activision shares if the deal falls apart, Klymochko said.

Given the length of time until the expected closing of the Activision purchase, the stock has to endure higher volatility for at least a few more quarters tied to company-specific newsflow and general market performance.

And investor Warren Buffett has bought a stake of about 9.5 per cent in Activision in a merger arbitrage bet. The 91-year-old billionaire has about seven decades of experience in arbitrage, including in technology companies: He bought shares of Red Hat Inc. before it was acquired by International Business Machines Corp. in 2019.

Last week, MoffettNathanson LLC analyst Clay Griffin upgraded Activision to outperform. “Though we’d push back on the notion that Microsoft will be closing on Activision any day now, we do see strong rationale for why it ultimately should,” he wrote.