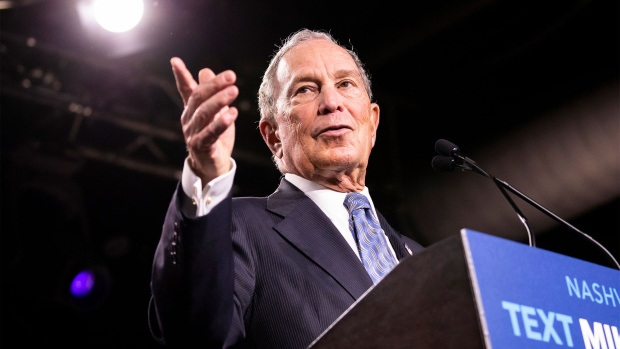 The plans include a 0.1 per cent transactions tax, merging Fannie Mae and Freddie Mac, and regulating Wall Street in ways that ensure the financial system is “strong enough to weather crises without harming the broader economy or requiring taxpayer bailouts.”

“Our sense is that these proposals are primarily intended to blunt progressive attacks, especially with Bloomberg joining the debate stage for the first time on Wednesday evening,” Boltansky wrote in a note.

At the same time, the “overarching tone of the proposals underscores the populist shift in the Democratic party and the heightened potential for significant policy shifts.” While Bloomberg’s proposals aren’t as sweeping as plans previously outlined by the Sanders and Warren campaigns, “they are more politically progressive than originally expected,” he said.

The plan “indicates a leftward turn for a candidate seen to be rising as a moderate alternative with the adoption of some of the liberal policy views of his rivals – particularly on bank oversight, a financial transactions tax and consumer protections,” Mills wrote.

It also highlights that the “risk to financials is real should a Democrat win in November,” even though many of Bloomberg’s ideas require Congressional action and face a long road to being enacted, he added.

The proposals for big banks and Wall Street don’t go “as far as what Senators Bernie Sanders and Elizabeth Warren are advocating,” but weren’t as “moderate as some in the market might expect from Bloomberg,” Seiberg wrote.

Cowen was particularly “surprised with his financial transaction tax and his call to merge Fannie and Freddie.” Even so, Seiberg cautioned against overreacting, as “Bloomberg understands markets, which makes it less likely that he would push policies that could hurt the economy.”

Bloomberg has preemptively taken a stab at “throwing Wall Street under the bus,” perhaps ahead of being “pilloried for using his billions to outspend his rivals ten-to-one, and amid a flurry of negative news coverage rehashing his alleged sexism, racism and other alleged transgressions as a mayor and CEO,” Capital Alpha wrote.

Though the plan may “annoy a lot of his friends on Wall Street,” many of Bloomberg’s ideas “would either be forgotten or rejected by lawmakers and regulators if Bloomberg were to win the presidency,” they said.