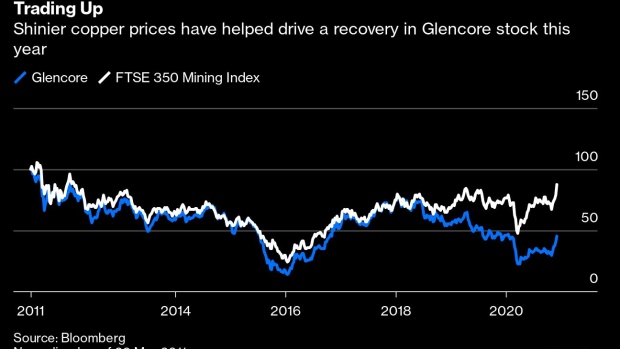 (Bloomberg Opinion) -- It’s hard to imagine a more daunting task than taking the reins from Ivan Glasenberg, Glencore Plc’s chief executive officer, a man who put his stamp on his company like few other corporate leaders have. Thankfully, his 45-year-old successor, fellow South African Gary Nagle, has a way to make his own mark: by finding a way for the mining giant to exit coal, the business he currently oversees.

Having spent two decades transforming Glencore from a secretive trading outfit into its present globe-spanning incarnation — most notably via the 2013 takeover of Xstrata — the swashbuckling, outspoken, Glasenberg chose a low key way to reveal his imminent retirement at an investor event on Friday.

The company’s 2011 stock-market listing made billionaires of several Glencore executives (Nagle wasn’t part of that gilded generation), although they were made to work for their money. Glasenberg, a keen athlete, isn’t exactly a fan of work-life balance.

Glasenberg’s empire building hasn’t been immune to crisis. In 2015, when the commodities boom abruptly ended, Glencore was left holding too much debt. He kept the detested short sellers at bay on that occasion and the company’s balance sheet is now in much better shape. However, he’s leaving plenty for his successor to do.

Top of that list is dealing with various ongoing corruption probes and fixing Glencore’s environmental image so that investors worried about climate change don’t shun the miner.

The company is being investigated in the U.S, U.K. and Switzerland over possible breaches of money laundering and bribery statutes in the Democratic Republic of Congo and elsewhere. Nagle can’t do much to bring those investigations to a conclusion, though it helps that he belongs to a young generation untarnished by those enquiries.

On climate, there will be plenty of opportunity to forge his own path.

At Friday’s investor event Glencore committed to cutting its emissions, including those of its customers, to net zero by 2050. This is laudable, and on paper more aggressive than most in the sector, but much of the improvement will come from simply allowing some coal mines to age, rather than selling them. That is less impressive. Coal is declining fast in Europe, but Glasenberg has long pointed to continued demand in Asia.

Coal accounts for only a small part of Glencore’s overall revenue, and the rest of its portfolio includes commodities that that are fundamental to reducing emissions. Its copper is used in wind power and electricity grids, while its cobalt and nickel are vital for electric-vehicle batteries. Still, coal has an outsized importance for investors, who are increasingly inclined to avoid companies that aren’t doing enough to tackle the climate emergency.

Glasenberg is right that a coal spin-off won’t change the fact that coal from Glencore’s mines will keep producing emissions until they’re depleted or shut down. Pushed by analysts on Friday, however, he said his successor was free to rethink the company’s presence in coalmining if he felt it would lift shareholder value.

Glencore’s shares could do with a boost. Though they’ve more than doubled since a March low, the stock remains more than 50% below the high reached when Glencore first listed in 2011.

A coal spin-off isn’t straightforward; there’s the small matter of finding investors willing to own these assets in a world increasingly hostile to pollution. While Glasenberg says he won’t overshadow his successor and won’t sit on the board, Nagle will know that his former boss, who retains a 9% stake, will be watching carefully how his fortune is being looked after.

Nevertheless, Glasenberg is a great believer in shareholder value and he can’t be happy with where the stock price is now. Time for Nagle to show the fearlessness that his predecessor did throughout his storied career.