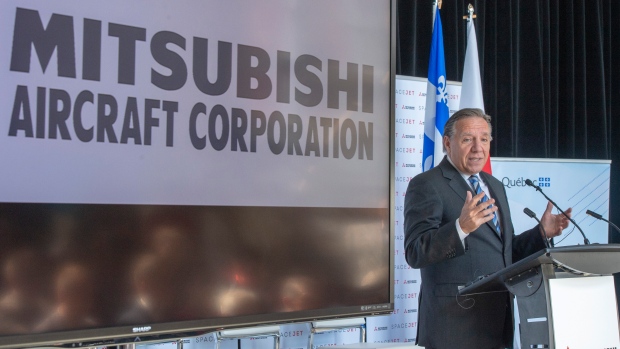 MONTREAL -- The Mitsubishi Aircraft Corp. is putting down roots in Quebec, unveiling plans for a Montreal-area product development centre after reaching a deal in June to buy Bombardier Inc.'s regional jet program.

The office will be part of the company's push to get a single-aisle airliner off the ground in 2020 as it doubles down on regional planes. It plans to hire 100 engineers and certification specialists in Montreal within a year to assist the point team in Washington state and facilities in Nagoya, Japan.

The Quebec government is lending Mitsubishi $12 million, which will be forgiven if the Japanese firm provides high-paid employment for 250 workers over five years, Premier Francois Legault said.

Legault sought to justify the loan to a multinational that generated more than $50 billion in revenue last year and in a sector that already suffers from a shortage of skilled labour.

"What I understand is that they had three scenarios, three business cases -- one in Japan, one in the United States and one in Montreal. And the package, including the expertise available and also the financial incentives, the best proposal was coming from Montreal," he told reporters Thursday.

Alex Bellamy, the company's chief development officer, said the loan helped Mitsubishi to settle quickly on the Montreal area, which has a rich cluster of aeronautics firms, after the idea was first floated at the Paris Air Show in July.

"I think the speed was unprecedented," Bellamy said. "And the incentivization in terms of helping us establish a footprint, the commitment that the Quebec government gave to us just made us believe this is a good place to do business."

Launched in 2008, the regional jet program has seen numerous setbacks, with the first model -- then known as the MRJ90 -- initially scheduled for delivery in 2013.

Mitsubishi plans to rent office space this autumn in or near the Montreal suburb of Boisbriand, home to several aeronautics firms.