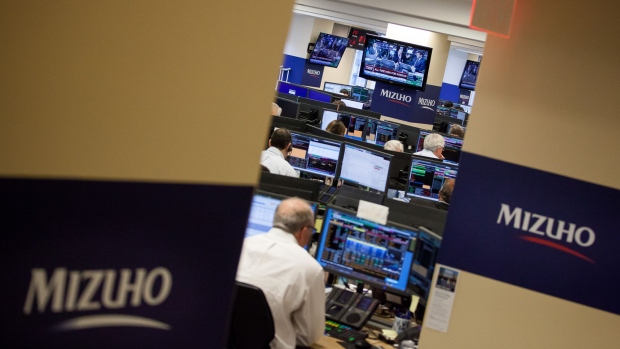 Traders work on the Mizuho Americas trading floor in New York, U.S., on Wednesday, April 26, 2017. Mizuho Financial Group Inc. is seeking to boost its presence in Yankee bonds -- dollar-denominated bonds issued in the U.S. by foreign entities -- in a bid to tap into its global network and boost fee income from some of Asia and Europe's largest companies. Photographer: Michael Nagle/Bloomberg , Bloomberg

(Bloomberg) -- Mizuho Financial Group Inc. is requiring that staff who choose to return to its U.S. offices are vaccinated, according to a spokesman for the Japanese lender.

Employees can return to the office through August on a voluntary basis and those who do must have had shots, subject to some limited exceptions, spokesman Jim Gorman said in an emailed statement. Protocols after August are still under evaluation, according to Gorman.

Wall Street is seeking to bring staff back as vaccines help the U.S. recover from a pandemic that forced most employees to work from home. JPMorgan Chase & Co., which mandated a return to office for its entire U.S. workforce by early July on a rotational schedule, said in April that it wouldn’t require returning staff be vaccinated, though it strongly encouraged employees to get the shots. Blackstone Group Inc. earlier this month asked U.S. investment professionals to return to the office full-time on June 7 provided they are fully vaccinated.

Mizuho’s U.S. offices include locations in New York, Los Angeles, Houston, Dallas, Chicago, Boston and Atlanta, according to its website.