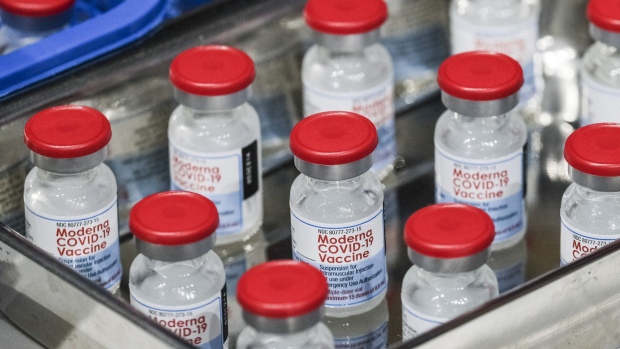 Vials of the Moderna Inc. Covid-19 vaccine at a vaccination site inside a gymnasium in San Juan City, Metro Manila, the Philippines, on Tuesday, Dec. 28, 2021. The Philippines has shortened the interval for administering Covid-19 vaccine boosters amid the threat of the omicron variant. , Bloomberg

(Bloomberg) -- Moderna Inc.’s Covid-19 shot received unanimous backing from a group of key U.S. health advisers after its approval, a move that could help encourage the hesitant to get vaccinated as the omicron variant continues to spread across the country.

All 13 members of the U.S. Centers for Disease Control and Prevention’s Advisory Committee on Immunization Practices voted to recommend the two-dose regimen for adults on Friday.

Moderna’s shot, to be sold under the brand name Spikevax, won full approval this week from the Food and Drug Administration, becoming the second Covid vaccine to gain such a clearance. The similar messenger RNA shot from partners Pfizer Inc. and BioNTech SE was fully approved by regulators last year. Previously, the shots were available under emergency-use authorizations.

Another full clearance for a shot that has had a major role in the U.S. immunization campaign could persuade more holdouts who were wary of the initial review process to get shots. About a quarter of Americans who are eligible still haven’t received a vaccine, according to the CDC.

While messenger RNA shots have been associated with an elevated rate of heart inflammation in people 12 to 39 years old, the benefits of the vaccine clearly outweigh the risks, according to a government report published last July.

The CDC presented evidence during Friday’s meeting from safety monitoring systems in multiple countries showing that there is an increased, but rare, risk of myocarditis following vaccination with a messenger RNA shot. The highest risk was most commonly seen in young males after receiving a second dose.

As of Feb. 4, more than 204 million doses of Moderna’s vaccine have been administered in the U.S., accounting for about 37% of the 540 million shots administered overall.

At the same time, a subvariant of the omicron strain called BA.2 has been detected in at least 57 countries. While it appears to spread more easily than the original, initial findings show it doesn’t seem to cause more severe disease and booster shots remain an effective shield.

The subvariant is estimated to account for less than 1% of all sequenced cases, but the proportion of BA.2 has been steadily increasing, a CDC spokesperson said in an email Thursday.