Moderna to seek emergency use of COVID vaccine in U.S., EU

Moderna Inc. plans to request clearance for its coronavirus vaccine in the U.S. and Europe on Monday, after a new analysis showed the vaccine was highly effective in preventing COVID-19, with no serious safety problems.

The primary analysis, which included 196 cases, found the vaccine was 94.1 per cent effective, in line with preliminary findings released earlier this month. All 30 severe cases observed in the study occurred in participants who received a placebo, according to a company statement, indicating 100 per cent efficacy against severe disease for the shot.

Moderna rose as much as 18 per cent as of 12:18 p.m. in New York to a record US$150.14. They have gained more than sevenfold since the year began. The company’s market capitalization of more than US$58 billion has surpassed that of Regeneron Pharmaceuticals Inc., which had US$7.8 billion in revenue last year and is producing a COVID-19 antibody cocktail.

The new results put the Cambridge, Massachusetts-based biotechnology company on track to have one of the first COVID-19 vaccines to be cleared in the U.S. A similar vaccine from Pfizer Inc. and BioNTech SE was submitted to U.S. regulators earlier this month and is scheduled to be reviewed ahead of Moderna’s shot.

Moderna said it plans to apply on Monday for an emergency-use authorization for the vaccine in the U.S. and for conditional marketing authorization in Europe. Advisers to the U.S. Food and Drug Administration will likely scrutinize the data at a public meeting on Dec. 17, the company said, one week after a similar review of Pfizer’s vaccine is expected to take place. 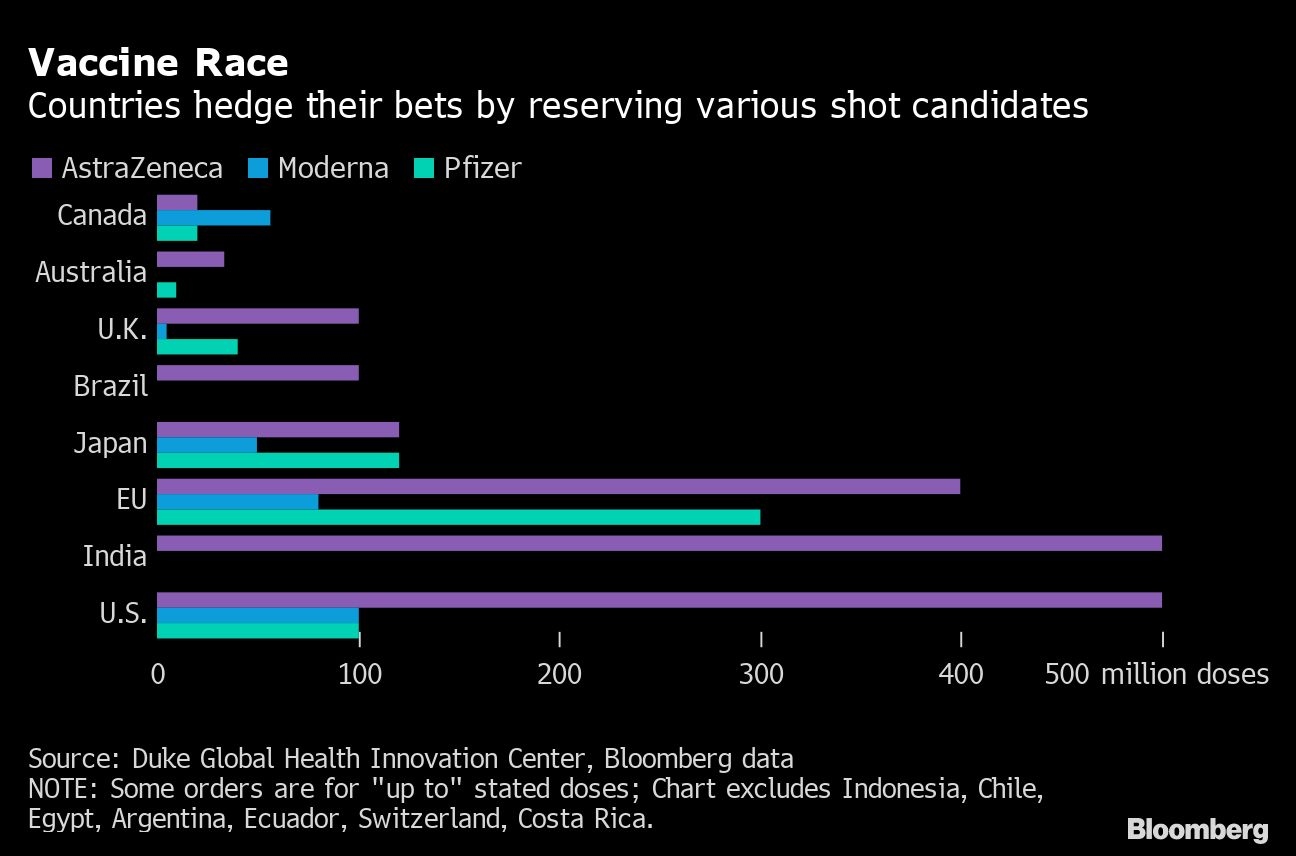 “We have been working nonstop in the last few weeks” to get the vaccine data ready to submit to regulators, Stephane Bancel, Moderna’s chief executive officer, said in an interview. Once authorities sign off, the company will move quickly to distribute the shots, part of a vast vaccination effort that will unfold as hospitals in the U.S. strain under a surge in infections.

“We are ready today to ship the vaccine,” Bancel said. “We have millions of doses ready, we have more and more every couple days.”

The U.S. reached a deal worth as much as US$1.5 billion for 100 million doses of the Moderna shot in August. The European Union, Canada and Japan have also have large purchase agreements, and the U.K. has secured 7 million doses. 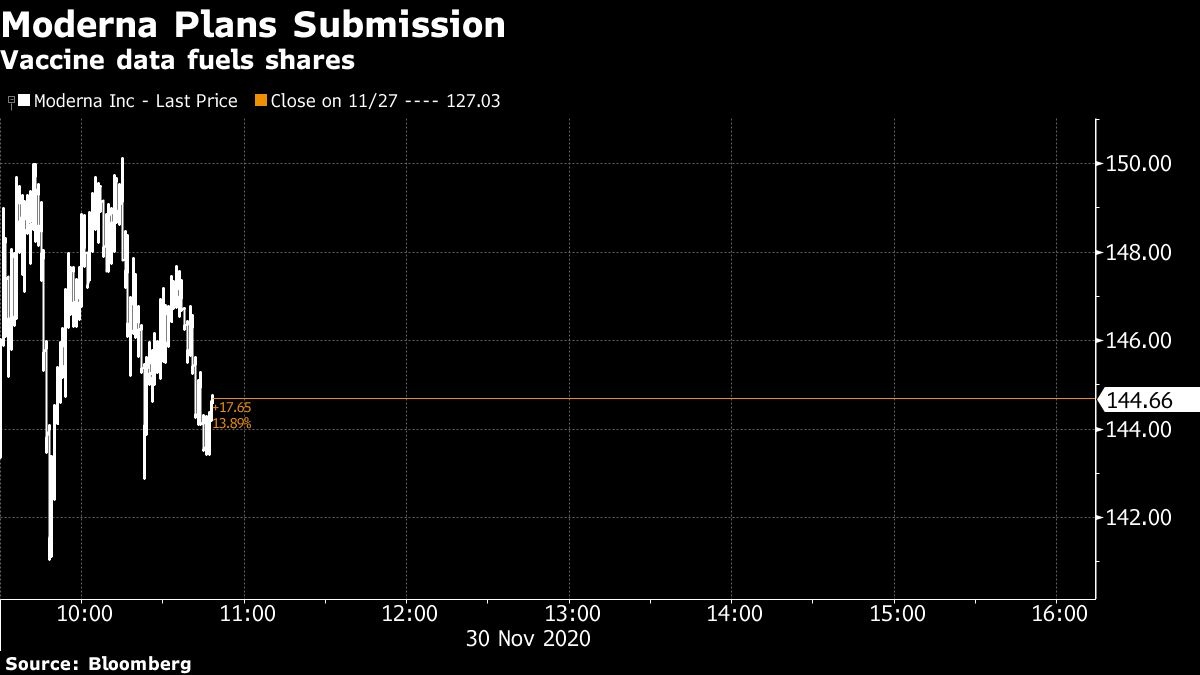 If the vaccine is cleared in the U.S., which Bancel said could occur as soon as 24 to 72 hours after the Dec. 17 meeting, Moderna’s entire inventory will be sent to the federal government. New lots will be shipped as soon as they pass muster, Bancel said. The company expects to be able to ship 20 million doses in the U.S. by the end of the year.

“This will be like a typical flu vaccination, just at a scale that has never happened in the world in terms of the number of people to be vaccinated at the same time,” Bancel said Monday in an interview on Bloomberg Television.

The new analysis showed the vaccine worked consistently well in older and younger adults, as well as minorities, the company said. Moderna didn’t disclose the vaccine’s exact efficacy in those groups, and Bancel said that more detailed data is still being finalized.

Overall, there were 185 cases of COVID-19 in trial participants who got a placebo, and 11 cases in people who got the vaccine.

As mandated by the FDA, Moderna said it had also accumulated two months of safety data from its final-stage trial of more than 30,000 participants. Reported side effects included injection-site pain, fatigue, muscle or joint pain and headache. The side effects were more common and severe after the second dose of the two-dose vaccine, Moderna said.

The results bolster an interim analysis released on Nov. 16, which showed the vaccine was 94.5 per cent effective in preventing symptomatic COVID-19 and successful in preventing the most severe infections.

U.S. regulators declined to confirm when they would consider the Moderna vaccine for authorization. “We respectfully decline to comment at this time,” Abigail Capobianco, a spokeswoman for the FDA, said in an email.

The FDA “MUST ACT QUICKLY,” President Donald Trump said in a tweet.

The current trial results are based on reducing symptomatic cases. But by early next year, Moderna should also know whether the vaccine can also prevent people from getting infected at all, Bancel said during the TV interview. The company also plans to begin additional trials of the vaccine in groups not included in the current study, including a trial in teenagers and a another trial testing the shot in people with cancer.

On Nov. 20, Pfizer and German partner BioNTech became the first to seek emergency U.S. clearance for a vaccine, after their shot was 95 per cent effective in preventing symptomatic COVID-19 in the final analysis of a nearly 44,000 participant trial. That vaccine application will be reviewed by a panel of FDA advisers on Dec. 10, potentially paving the way for it to become available soon after that.

Both the Moderna and Pfizer vaccines rely on a technology called messenger RNA that turns the body’s cells into vaccine-making factories. Messenger RNA has never before been used to develop an approved vaccine.

--With assistance from Riley Griffin, Kristine Owram and Anna Edney