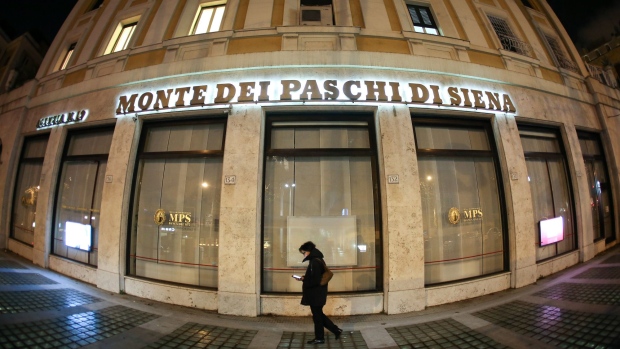 The sentence landed just as the Italian government was seeking to take advantage of the current wave of consolidation in the financial sector to sell its majority stake in the bank ahead of a European Union deadline at the end of next year.

The verdict of a Milan first-instance court, which ordered Alessandro Profumo and Fabrizio Viola to serve a sentence of six years, has increased the chance that at least part of around 10 billion euros ($12 billion) in legal risks will eventually materialize. This raises the cost of the sweeteners that pandemic-stricken Italy will have to offer investors.

After years of restructuring and slumping profits, the world’s oldest lender may struggle to withstand the pandemic’s impact on companies and credit. Civil and criminal cases related to its former management have dogged the lender since the rescue and legal risk is seen as a potential impediment to any deal that make take the bank out of government hands.

Monte Paschi said in its last 6 month report that risks linked to disputes and legal cases rose at about 10 billion euros, for which it has set aside only a small portion of funds, as only a bunch of them are considered “likely to happen.”

To solve the problem, the administration of Prime Minister Giuseppe Conte has identified UniCredit SpA as a potential buyer who could be persuaded to overlook Paschi’s many woes. Spokesmen for Monte dei Paschi and Unicredit declined to comment.

The appointmentof Pier Carlo Padoan, Italy’s finance minister between 2014-2018, as UniCredit’s next chairman was aimed at smoothing the path toward a takeover, according to Italian media. Instead, it sparked a political firestorm.

Several senators in the Five Star party, a member of Conte’s fractious government coalition with the Democratic Party, dubbed Padoan’s appointment “a macroscopic conflict of interest.” Padoan was appointed director of UniCredit Oct. 13 and is designated to be named chairman for the 2021-2023 term.

In 2017, when he was finance minister, Padoan engineered the state-financed bailout of Paschi, which is now 68% owned by Italy, promising European authorities the state would exit the bank by next year. Finance Minister Roberto Gualtieri recently confirmed that goal saying the state wants to save the bank, not break it up. Following this week news, the treasury expects to continue the sale as planned, according to an official who asked not to be named in line with an internal policy.

Padoan, a Democrat lawmaker, said he will resign from Parliament to fully concentrate on his new role at Unicredit, sparking further tension inside the fragile government coalition.

Even with Padoan as chairman, it is not a given that UniCredit will decide to buy Paschi from Italy.

Chief Executive Officer Jean Pierre Mustier has said the Milan-based lender isn’t interested in mergers or acquisitions. But pressure is mounting on UniCredit to act after rival Intesa Sanpaolo SpA added scale in Italy with the acquisition of UBI Banca SpA.

UniCredit executives have held informal contacts with the government over a possible combination, people familiar with the matter have said. Still, the bank has made it clear it won’t consider a deal that isn’t at least capital neutral and that doesn’t shield it from the legal risks, the people have said.

Those uncertainties have become more concrete after the initial conviction of Profumo and Viola. Lawyers representing the defendants said they will present appeal against the sentence. A sentence in Italy is definitive only after a third judgment.

That leaves the state, which has already committed more than 5 billion euros to the bank’s rescue so far, in the uncomfortable position of having to provide that shield at a cost of several more billions of euros just when it needs every euro to shore up the economy against the impact of coronavirus.

At least, there is a precedent for the state aid. In 2017 the Treasury agreed to guarantee up to 12 billion euros to cover the legal risks and bad loans of two failing Veneto-based banks taken over by Intesa Sanpaolo -- and all for the symbolic price of 1 euro.