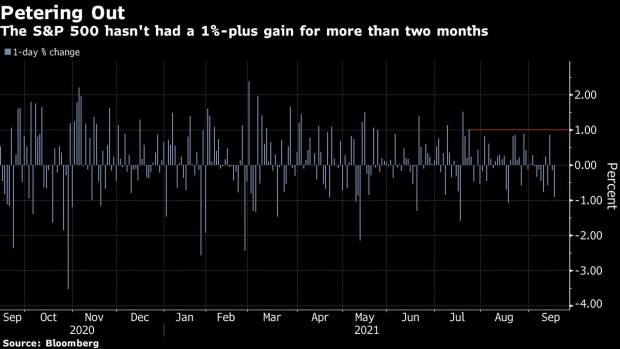 A sign sits on the Morgan Stanley U.K. headquarters in the Canary Wharf, business, financial and shopping district of London, U.K., on Friday, Sept. 18, 2020. After a pause during lockdown, lenders from Citigroup Inc. to HSBC Holdings Plc have restarted cuts, taking gross losses announced this year to a combined 63,785 jobs, according to a Bloomberg analysis of filings. Photographer: Simon Dawson/Bloomberg , Bloomberg

(Bloomberg) -- A plunge of more than 20% in U.S. stocks is looking more like a real possibility, according to Morgan Stanley strategists led by Michael Wilson.

While it’s still a worst-case scenario, the bank said that evidence is starting to point to weaker growth and falling consumer confidence.

In a note on Monday, the strategists laid out two directions for U.S. markets, which they dubbed as “fire and ice.” In the fire outcome, the more optimistic view, the Federal Reserve pulls away stimulus to keep the economy from running too hot.

“The typical ‘fire’ outcome would lead to a modest and healthy 10% correction in the S&P 500,” they wrote.

But it’s the more bearish “ice” scenario that’s gaining traction, the strategists said, laying out a picture in which the economy sharply decelerates and earnings get squeezed.

Stocks globally fell on Monday on concern that the debt crisis at China Evergrande Group could impact the broader financial system. U.S. futures pointed to a drop of about 1% at the market open. Still, the S&P 500 is just about 2% off its all-time highs.

Among Wall Street strategists, Morgan Stanley is more bearish than most, but their views echo other banks that have come out with ominous predictions recently. Strategists at Goldman Sachs Group Inc. and Citigroup Inc. have also written about the potential for negative shocks to end the U.S. market’s relentless rise.

“Will it be fire or ice? We don’t know, but the ice scenario would be worse for markets and we are leaning in that direction,” Morgan Stanley’s strategists wrote. “We think the mid-cycle transition will end with the rolling correction finally hitting the S&P 500.”

The bank recommended investors stick to defensive, quality companies to protect themselves and keep some exposure to financial stocks, which will benefit from rising interest rates.