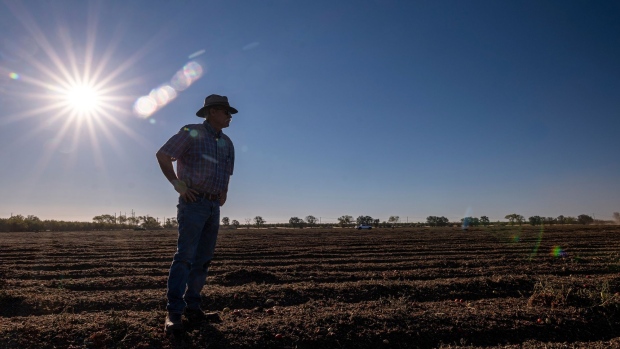 Bruce Rominger in his tomato field in Winters, California, US, on Friday, Aug. 12, 2022. Drought and water shortages are hurting processing tomato production in a region responsible for a quarter of the worlds output, with the squeeze set to exacerbate already elevated prices for tomato-based goods. Photographer: David Paul Morris/Bloomberg , Bloomberg

(Bloomberg) -- Farm conservation programs will need to dramatically shift funding priorities if they are to fulfill the key role combating climate change that the Biden administration promotes for them, according to an environmental group’s analysis of projects funded in recent years.

Of the two largest conservation programs, one devoted less than a quarter of funds to projects the Agriculture Department deemed “climate smart” and the other devoted about 5% to such projects, according to an analysis by the Environmental Working Group of $7.4 billion in projects funded from 2017 through 2020.

The trend didn’t change during the first year of the Biden administration, when climate-friendly projects accounted for only 23% of payments made through the Agriculture Department’s Environmental Quality Incentives Program, according to the analysis, which is based on records obtained through the Freedom of Information Act. The group hasn’t yet received complete data for 2021 from the other program, a spokeswoman said.

“They have to put their money where their mouth is,” said Anne Schechinger, the group’s Midwest director and author of the report. “They’re touting these programs as major ways that farmers can reduce climate emissions but not much money from these programs are going to actual practices that are good for the climate.”

The Biden-backed Inflation Reduction Act that Congress passed in August provides almost $20 billion in new funding for farm conservation efforts, with instructions that the money should be used for projects that address climate change.

Schechinger said those instructions fall short of a mandatory requirement, and delivering on the promise will require “a mindset change” for on-the-ground USDA officials used to approving projects that are financially rewarding for farmers while satisfying traditional goals such as reducing soil erosion and protecting water quality.

USDA said in an emailed statement that the Biden administration has taken “bold steps to support adoption of climate-smart agriculture” including more funding this year in conservation programs and $2.8 billion for pilot projects in a separate program. The Inflation Reduction Act will “take our support for climate-smart practices to the next level.”

The Biden administration approach to climate policy in the politically sensitive farming sector so far has stressed voluntary incentives through USDA conservation programs and private carbon markets rather than new regulations. Agriculture accounted for 11% of US greenhouse gas emissions in 2020, according to the Environmental Protection Agency.