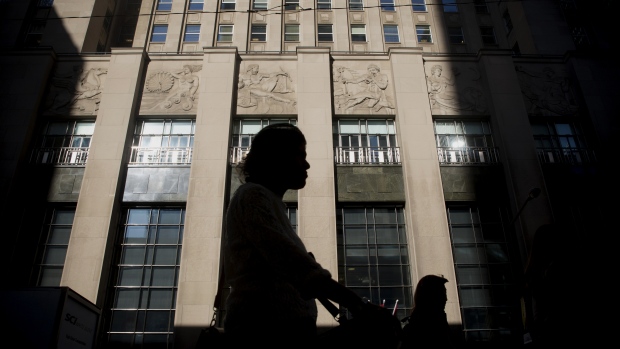 Commuters walk past the Bank of Nova Scotia (Scotiabank) building in the financial district of Toronto, Ontario, Canada, on Thursday, June 30, 2016. , Brent Lewin/Bloomberg

OTTAWA -- A report on gender equality in corporate Canada and the U.S. finds that the majority of Canadian companies are not closely watching differences in pay or advancement between men and women and other key measures of progress.

A cross-border council on women in business commissioned a survey of human resources professionals in Canada and the U.S. and found that just 39 per cent of Canadian companies had accurate data on gender pay differences.

The Canada-United States Council for Advancement of Women Entrepreneurs and Business Leaders' report also found that less than half of Canadian companies said they have accurate data on the percentage of women at the management level.

The survey of 150 human resources executives in Canada and 250 in the U.S. also found that just 36 per cent of Canadian companies have a plan to advance women to senior leadership roles, compared to 40 per cent south of the border.

The council says in its final report released last week that while corporate commitment to gender diversity is at an all-time high, these survey results point to a "critical gap" between intention and action.

The council of 10 female executives was created by Prime Minister Justin Trudeau and U.S. President Donald Trump last year and its aim is to help women-owned businesses contribute to economic growth and competitiveness.