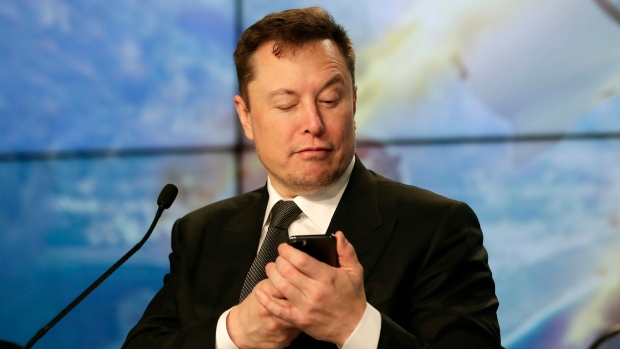 Elon Musk founder, CEO, and chief engineer/designer of SpaceX jokes with reporters as he pretends to be searching for an answer to a question on a cell phone during a news conference after a Falcon 9 SpaceX rocket test flight to demonstrate the capsule's emergency escape system at the Kennedy Space Center in Cape Canaveral, Fla., Sunday, Jan. 19, 2020. AP Photo/John Raoux

Bill Gates paid Tesla Inc. a compliment for coaxing the car industry to go electric. If he was expecting kind words in return from Elon Musk, he apparently shouldn’t have spoken about challenges that still lie ahead -- or about his new Porsche.

Gates, the billionaire co-founder of Microsoft Corp., spoke with a YouTube influencer last week about the challenges of reducing emissions to slow climate change. He called the passenger-car industry “one of the most hopeful” sectors taking action in this regard.

“And certainly Tesla, if you had to name one company that’s helped drive that, it’s them,” Gates told YouTuber Marques Brownlee.

Then Gates discussed recently buying a Porsche Taycan. While he called the electric sports car “very, very cool,” he acknowledged its premium price -- starting at US$103,800 -- and said consumers still have to overcome anxieties about EVs offering limited range and taking longer to recharge. Gasoline-powered cars travel longer between quick refuels at stations that outnumber charging points.

When a Tesla enthusiast posted about being disappointed in Gates’s decision to buy a Taycan instead of a Tesla and his comments about range anxiety, Musk replied: “My conversations with Gates have been underwhelming tbh.”

Musk, 48, is of course no stranger to tweeting dismissively about fellow billionaires. The Tesla chief executive officer questioned Facebook Inc. CEO Mark Zuckerberg’s understanding of the risks of artificial intelligence in 2017. Last year, he called Jeff Bezos a copycat after the Amazon.com Inc. CEO embarked on an internet-satellite project that could rival one that Musk’s closely held company SpaceX is pursuing.