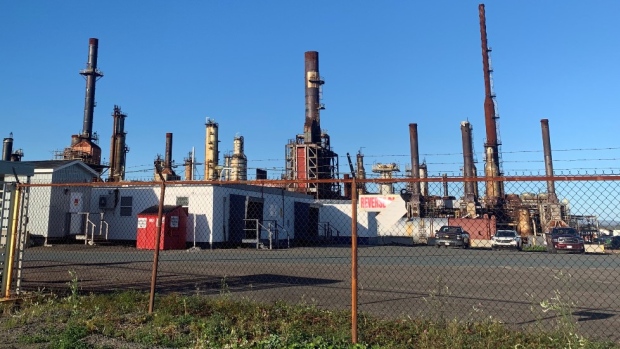 The oil refinery in Come By Chance, N.L. is shown on Tuesday, Oct.6, 2020. Newfoundland and Labrador Premier Andrew Furey says discussions about the future of the oil refinery in are ongoing. , THE CANADIAN PRESS/Paul Daly

The idled Come By Chance refinery in Newfoundland and Labrador will be transformed into a green diesel plant as part of an agreement between its new U.S. private equity owner and the eastern Canadian province.

Cresta Fund Management LLC acquired a controlling interest in the North Atlantic Refining Ltd. refinery in the maritime town of Come By Chance, Newfoundland and Labrador Premier Andrew Furey said Tuesday in a press conference. Dallas-based Cresta, which agreed to buy the refinery in July, had already said it planned to convert the facility into a renewable diesel plant.

The plant will be renamed Braya Renewable Fuels and New York-based private equity firm Silverpeak, the prior controlling entity, retains a minority interest and continues to control NARL Marketing. The plant will supply fuels to the maritime province, but the region will continue importing from elsewhere.

The decades-old plant joins a growing list of refineries in North America that are being converted to make renewable fuel after the pandemic slashed gasoline demand and investors increased pressure to help fight climate change. The refinery was among the first of numerous casualties from the health crisis last year when oil demand plunged after the world rolled out massive restrictions and halted air travel.

Braya will convert the warm-idled refinery to make renewable diesel and sustainable aviation fuel, with initial production capacity of 14,000 barrels per day by about mid-2022. Braya could also be expanded to a reach a capacity of 35,000 barrels per day, generating green hydrogen, and expanding feedstock flexibility.

Work associated with Phase I at the site is already underway, and there are already discussions for a possible Phase III expansion at the site, Silverpeak partner Kaushik Amin said during the press event.

The partners of the project expect to target California for now as a key market for their products, which will also include the auto-fuel ingredient naphtha, since the state already has low-carbon fuel rules. Destinations will be expanded as regulations progress elsewhere, including in Canada.

The province has also reached a new 10-year environmental indemnity agreement for the refinery that covers historical contamination prior to the acquisition of the refinery by NARL in November 2014. Part of the agreement is also to maintain employment levels at no less than 200 workers.

The 130,000-barrel-a-day refinery began service in the 1970s and passed through several owners including state-owned Korean National Oil Corp.