Canada’s oil sands industry may have already built its last big mine.

The cancellation of Teck Resources Ltd.’s Frontier project in northern Alberta -- which envisaged producing more crude than OPEC member Gabon -- epitomizes the struggles of an industry that has already seen most foreign investors flee. It’s not clear that any other proposed mine would be able to clear the hurdles that felled Frontier in the years to come, possibly spelling the end of an era of megaprojects that transformed North America’s energy landscape by turning Canada into the top foreign crude supplier to the U.S.

“This may be the nail in the coffin,” said Laura Lau, who helps manage $2 billion (US$1.5 billion) in assets at Brompton Corp. in Toronto. “I would expect some smaller projects would have a better chance going through.”

On top of middling oil prices, a pipeline capacity shortage in Canada and heightened competition from U.S. shale, the oil sands have become a particularly shunned industry in a world of rising concerns about climate change, leading some major funds to divest their holdings. And with speculation oil demand could peak in 10 years or so, companies are growing increasingly wary of committing to multibillion-dollar projects that require decades of operation to pay out.

BNN Bloomberg's Amanda Lang discusses the reasoning behind the cancellation of Teck's Frontier mine project.

The oil sands of Alberta have drawn the ire of environmental activists because of the region’s vast open-pit mines that require the clearance of forest, produce massive lakes of wastewater and consume more energy than other ways of extracting oil. Refining the sticky, black bitumen scooped from some mines in so-called upgraders is also very carbon-intensive. Newer, smaller projects, while more efficient, still use a lot of energy to extract the oil with the help of steam.

While attempts to make Canada’s oil sands into an economically viable source of crude have been ongoing for about a century, the industry experienced its heyday in the 2000s and 2010s, when fears abounded that the world may be running out of crude.

Those fears prompted a flood of global investment as nations and international producers rushed to secure supplies. From 2004 to 2014, about $210.1 billion was invested in the oil sands, according to data from the Canadian Association of Petroleum Producers. Over those 10 years, oil-sands output more than doubled, to 2.2 million barrels a day, and Canada shot up from the world’s eighth-largest oil-producing nation to the fifth-largest.

The industry has struggled since global oil prices crashed from more than US$100 a barrel in mid-2014. New pipeline projects were stalled by environmentalist opposition and legal challenges, weighing on Canadian heavy crude prices. International giants including Royal Dutch Shell Plc and ConocoPhillips sold off oil-sands assets. And capital spending in the oil sands fell for five straight years. 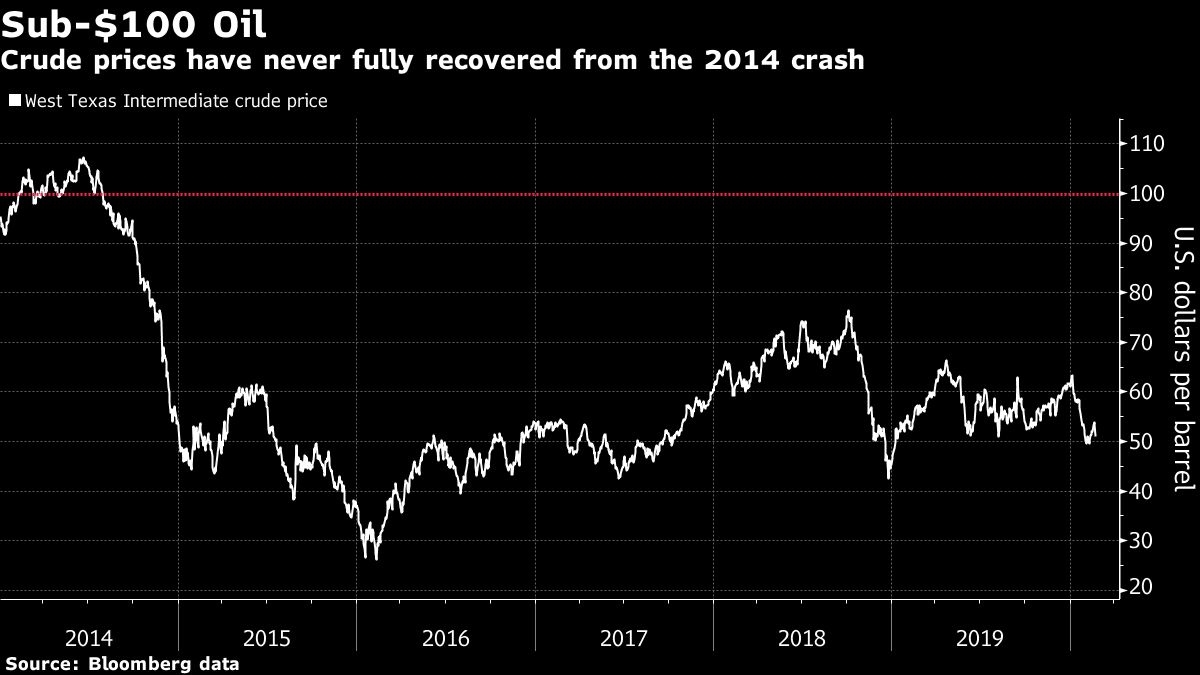 The situation came to a head in late 2018, when a wave of new production, the shortage of pipeline space and a heavier-than-normal refinery maintenance season in the U.S. combined to cause a crash in Canadian heavy crude prices. That prompted Alberta’s government to implement mandatory production limits that started in 2019 and may remain in effect for the rest of this year.

“The growing debate around this issue has placed Frontier and our company squarely at the nexus of much broader issues that need to be resolved,” Lindsay said. “In that context, it is now evident that there is no constructive path forward for the project.”

But the hard economic reality remains the potentially biggest hurdle. Frontier’s 2011 application relied on long-term oil prices over its four-decade life of about US$95 a barrel, a level global benchmarks haven’t seen since 2014. With both West Texas Intermediate and Brent crude prices in the US$50-a-barrel range and the U.S.’s Permian Basin continuing to pump more oil, those prices may not return anytime soon.

“This was the last big oil sands mining project advancing in the oil sands,” said Kevin Birn, IHS Markit’s director of North American crude oil markets. “Fully new greenfield ones outside this one, I don’t think there is any.”

Analysts had generally positive reactions to Teck canceling Frontier. Morgan Stanley analyst Carlos De Alba said that despite the $1.13 billion writedown Teck would take on the project, “it removes overhanging concerns about the company potentially making a significant investment in fossil fuel amid raising ESG focus.”

To be sure, the oil-sands industry is far from shutting down. Major producers are generally profitable and producing free cash flow. Capital spending is even projected to tick up this year. Producers are continually developing new technologies and finding ways to cut costs.

They can still expand existing mines and are able to add output from what are known as in situ projects, which resemble more familiar methods of oil extraction by tapping underground resources through the use of wells. Those tend to be smaller, cheaper and faster to build.

But even those projects are having trouble in the current environment. Imperial Oil Ltd. last year delayed its $2.6 billion Aspen oil-sands project, which had been approved and was scheduled to start production in 2022, because of Alberta’s production limits.

And with the cancellation of Frontier, there are no major mine projects of the kind that formed the industry’s bedrock. The last big mine to come online was Suncor Energy Inc.’s $17 billion Fort Hills mine, which started producing in 2018.

Teck is a partner at Fort Hills and is considering getting out of that investment, too.

--With assistance from Aoyon Ashraf.