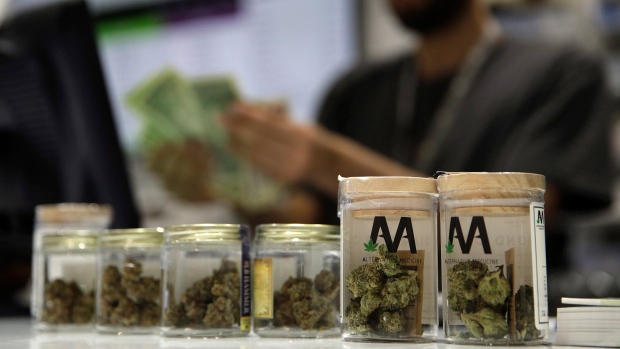 A cashier rings up a marijuana sale at the Essence cannabis dispensary in Las Vegas, July 1, 2017 , The Associated Press/John Locher

Marijuana is already a multibillion-dollar business in the U.S. that’s drawing attention from some lawmakers eager for tax revenue and investors looking for profits. So far, however, some of the biggest insurers are taking a pass.

Allianz SE, Hartford Financial Services Group Inc., and Nationwide Mutual Insurance Co. are among large insurers that aren’t covering marijuana-related businesses. Even as U.S. states increasingly permit the use of pot for medicinal or recreational purposes, the federal government has held fast in keeping weed illegal. That’s driven off name-brand insurers and left the field open for smaller firms.

“The whole conversation of cannabis crosses the desks of the most senior leaders of the insurance community as they determine whether or not they want to play in this game,” said Tom Fitzgerald, global broking officer at insurance broker Aon Plc. “There’s not every insurance company in the world anxious to write this stuff, at least not yet.”

Pot is big business, with consumer spending on legal cannabis estimated to reach US$11 billion this year and US$23 billion by 2022, according to a June report by Arcview Market Research with BDS Analytics. Recreational use of marijuana is now legal in nine states and Washington, D.C., while medicinal weed is permitted in more than 25 states and the nation’s capital, according to the National Conference of State Legislators.

Growers want protection against crop loss and other business coverage, and weed distributors and retailers need insurance as well. The companies have long known that U.S. banks won;t let them open accounts because of the federal law, and now they’re finding it difficult to buy insurance.

One of the smaller firms diving in is Continental Heritage Insurance Co. Ohio-based Continental, which also sells surety products like bail bonds, was licensed this year in California to offer coverage for marijuana-related businesses, including product liability.

“We have a history of basically seeking out markets that a lot of the larger companies tend to ignore,” said Continental Chief Executive Officer Charles Hamm. “We believe cannabis is one of those areas that has a great deal of potential.”

The fear of the federal government stepping in is overblown, according to Dave Jones, the California insurance commissioner. Recreational pot became legal in California, the biggest U.S. state, this year.

“There’s no risk of federal intervention and a very important upside for the insurance industry to participate,” Jones said in an interview. Marijuana is “a very large and growing industry that needs insurance.”

Hartford, based in the Connecticut city of the same name, said it’s abstaining from the industry, and “that is unlikely to change” while the federal ban is in place.

“We do not underwrite any business that sells, grows, transports or distributes marijuana or products derived from marijuana cannabinoids,” the company said in an emailed statement.

A spokeswoman for Allianz, Europe’s largest insurer which also has operations in the U.S., said it currently doesn’t offer coverage. Nationwide said in an emailed statement that, while it also avoids pot-related policies, “we continue to evaluate the market opportunities and challenges on this issue.”

As more states legalize marijuana, more carriers will come into the market, said Matt Porter, vice president with Cannabis Insurance Professionals, a division of Brown & Brown Inc., in Carpinteria, California. Another large market will be opening up later this year when recreational marijuana becomes legal in Canada on Oct. 17. And as the industry matures, insurers will be have access to more stats such as loss histories to help make underwriting decisions.

“They’ll want some actuarial data to back it up,” Porter said.

For now, smaller insurers are filling the gap. Hamm of Continental said that while no one knows how big the cannabis insurance market is going to get, his company will be there.

“We believe in this line of business absolutely,” Hamm said.