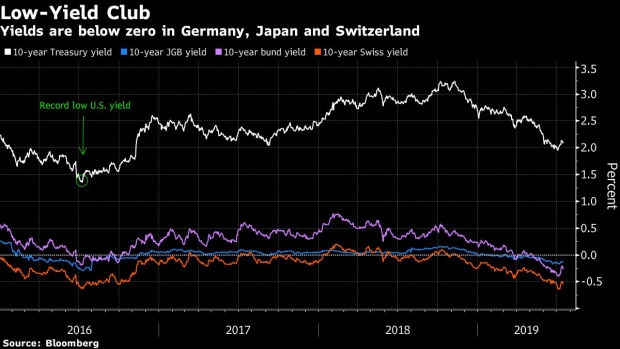 (Bloomberg) -- The world’s almost $13 trillion pile of negative-yielding bonds is looking like “quicksand” that risks engulfing much of the fixed-income universe, including the U.S., says JPMorgan Chase & Co.’s Jan Loeys.

The prospect of Treasury yields dropping to zero may seem remote, with the 10-year benchmark now back above 2%, the U.S. jobless rate near a 50-year low and stocks close to record highs. But Loeys, a senior adviser of long-term investment strategy, lays out a scenario in which that could happen.

It would be a multi-year process, in his view, that could be triggered by “a plain-vanilla recession” caused perhaps by an extended trade war and plummeting capital expenditures. As he sees it, that would push the Federal Reserve to cut rates to zero and resort to quantitative easing again as inflation ebbs. The net result: much lower yields.

“There’s a serious probability that in the next three years U.S. Treasury yields are at zero, if not negative, and the whole market is sitting at zero and negative yields,” said New York-based Loeys, who co-wrote a paper on the topic of zero yields with colleague Shiny Kundu.

The 10-year Treasury yield, a benchmark for global borrowing, has never been below 1.318%, which it dipped to in 2016 in the wake of the U.K. vote to leave the European Union. But Loeys says investors ought to be prepared for it to dive much lower in at least two stages should the scenario he envisions unfold.

First, as it drops below 1%, they should aggressively buy 30-year bonds while selling the dollar, and initially move away from stocks. Then, once the yield settles around zero, they should turn to higher-income securities, such as dividend-paying stocks, real estate investment trusts and emerging-market local debt, unhedged for currency swings.

The lesson of the past decade from Japan and Europe is that the “zero and negative-yielding world is like a sand trap,” he said. “The quicksand scenario is a process, not an event, a slow bleed that could take three or four years.”

The 10-year government yields of Switzerland, Germany and Japan -- now at -0.6%, -0.29% and -0.12%, respectively -- are back below zero after clawing above in recent years. The Swiss National Bank, the European Central Bank and the Bank of Japan all have negative policy rates. Economists anticipate additional stimulus from the ECB this year, while the Fed is widely expected to cut its 2.25%-to-2.5% target range this month.

A trend of higher U.S. inflation readings like those released last week would reduce the risk of yields eventually hitting zero, according to Loeys. But he says it would take six to 12 months of such data to bolster confidence that Treasuries can avoid the zero-yield outcome.

His view is far from consensus. The median of Wall Street forecasts is for the 10-year Treasury to yield 2.15% in the fourth quarter and 2.25% a year later. Granted, the median level for this year fell about 20 basis points in just the last month.

Luke Tilley, chief economist at Wilmington Trust Investment Advisors, says stronger growth and inflation worldwide will support higher yields at some point. He sees growth getting a boost from accelerating productivity and a reversal of low inflation, and says the 10-year yield will likely be “hard-pressed” to fall below 2% in the current environment. Even with a recession, he doesn’t expect it to get below 1%.

Investors need to get used to the idea that bonds -- whether negative-yielding or not -- aren’t going to provide as much cushion as they did in the past in the event of an equities bear market, he says.

“If the old playbook is to move from equities to fixed income in order to protect to the downside, the new playbook has to consider that fixed income is already highly valued,” as reflected in low yields, said Tilley, a member of the firm’s investment strategy team.

“That is what will force investors to look at other asset classes,” such as cash, he said.

For investors worried about the risk of 0% U.S. yields, though, the experiences of Japan and the euro region offer some insight, according to Loeys. One is that getting to zero and then staying there could be a two-step process, each lasting five years.

He also stresses the political context. Should the Fed add stimulus, a gridlocked Congress may not be able to agree on fiscal spending, increasing the momentum toward “a European/Japanese-like low-, if not zero-yield world,” he and Kundu wrote in their report.

“Don’t assume the U.S. is so different than the rest of the world,” Loeys said. “Europe and Japan are giving a warning that the same things that happened there could also be happening to the U.S.”