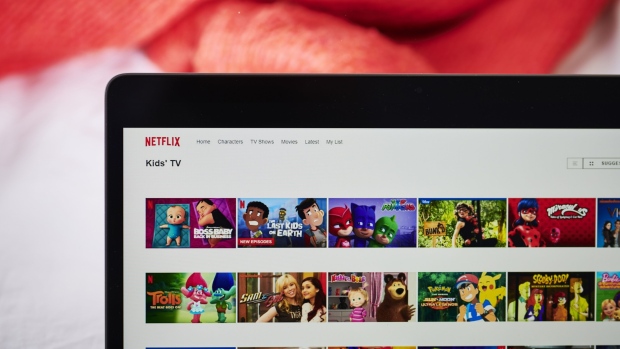 The home screen for the Netflix Inc. Kids section is displayed on a laptop computer in an arranged photograph taken in the Brooklyn Borough of New York, U.S., on Monday, April 20, 2020. Bloomberg/Gabby Jones

A trio of companies that have been favorite plays throughout the pandemic all received Street-high price targets from analysts on Friday, a sign that some on Wall Street see further upside after pronounced rallies.

Netflix Inc., Amazon.com Inc. and Nvidia Corp., whose chips are used in cloud computing and gaming, are all viewed as being well positioned with the coronavirus accelerating long-term growth trends as more consumers shop online and stay at home for entertainment.

All three stocks are up at least 65 per cent thus far this year; Nvidia has risen almost 80 per cent. The S&P 500 is in slightly negative territory for the year.

Goldman Sachs lifted its Netflix target to US$670 from US$540, contributing to an 8.6 per cent gain in Friday’s session. The firm wrote that the pandemic was “accelerating the shift” to streaming content, away from traditional TV, and that the company’s content library and distribution would “serve to steepen Netflix’s growth curve both in the immediate and long term.”

The comments come ahead of the July 16 release of Netflix’s second-quarter results, and at a time when analysts have been growing more cautious about the company’s valuation. Currently, the average price target on Netflix shares stands near US$462, implying downside of 16 per cent from current levels.

Recently, Rosenblatt Securities wrote that it “struggle[s] to see the upside” from current levels given “uncertainty over how [long] this favorable environment will last.” Imperial Capital downgraded the stock earlier this week.

While Amazon has been a consensus favorite during the pandemic, the stock has gotten ahead of analysts targets. The average target is about US$2,850, more than 10 per cent below current levels. According to an analysis of Bloomberg data, the degree to which the share price exceeds the average target is near a multi-year high.

Rosenblatt Securities raised its Nvidia target to US$500 from US$400, touting the long-term growth potential of its datacenter and gaming chips. The stock was little changed but it is coming off an eight-day advance, the latest leg of a rally that took Nvidia above Intel Corp. in market capitalization.

The average price target on Nvidia is US$391, implying downside of about 7 per cent from current levels.