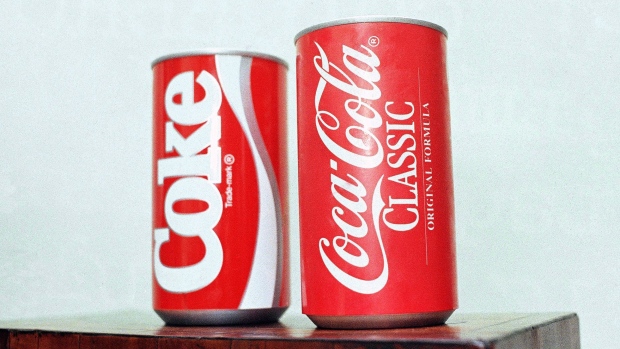 In this July 11, 1985 file photo, cans of New Coke and Coca-Cola Classic are on display during a news conference in Atlanta. , AP Photo/Charles Kelly, file

The Atlanta-based beverage company is reviving the much-maligned New Coke for a limited time this summer ahead of season three of the Netflix fantasy series “Stranger Things.” It’s set in 1985, the same year Coca-Cola unsuccessfully tried to foist a new formulation on consumers. New Coke will appear throughout the upcoming third season of the popular series, the companies said Tuesday.

Netflix said it hasn’t accepted any money from Coke for the prime placement of soda in the new season, and that show creators Ross and Matt Duffer conceived of the idea on their own. Coke will help promote the show by putting “Stranger Things” labels on bottles and cans.

Netflix has built a video business worth more than US$150 billion by giving its users an advertising-free alternative to cable and satellite. But the company has begun to experiment with ways of working with large corporations without selling traditional ads.

“It’s a new space for us,” Barry Smyth, Netflix’s head of global partner marketing, said in an interview. “We are not doing it for revenue. We are doing it to create good experiences for members, to the extent the creative expression of a show can be supported by working with a brand.”

“Stranger Things” is Netflix’s most popular original series, according to data from outside researchers, and has served as a way for Netflix to toy with new business opportunities. Hasbro Inc. has released a “Stranger Things” version of the popular board game Monopoly, while clothing retailer Hot Topic Inc. has sold “Stranger Things” T-shirts and sweatshirts.

Netflix has no plans to run traditional advertisements in the middle of its programs, but it has featured consumer goods in the plots of its shows. The “Stranger Things” characters eat Kentucky Fried Chicken in season two, while Subway sandwiches appear in the romantic comedy “To All the Boys I’ve Loved Before.”

Coke products have already appeared more than a dozen times in “Stranger Things,” an eerie teenage drama set in a small Indiana town during the 1980s. The new season takes place during summer, when the group of young friends is out of school. Coke said it discussed ways of further integrating its products into the show without forcing them.

Coke introduced New Coke in April 1985 to stem shrinking market share. But it ran afoul of fans who rained down mail and phone protests on the company. Coke backtracked 79 days later, announcing it would reintroduce the original formula.

Coca-Cola’s ambitions are more modest this time around. The company will sell a small batch of “Stranger Things”-branded glass bottles on its website, giving buyers a gift of two cans of New Coke when they buy two bottles. It will place “Stranger Things”-inspired vending machines in select cities and offer cans of regular Coke featuring the original design and a “Stranger Things” logo.

“The summer of 1985 was a big moment for us, and bringing back New Coke in a limited way will generate buzz and conversation,” said Stuart Kronauge, the president of Coke’s sparkling business unit in North America. “That’s good for us, and it’s good for ‘Stranger Things.’”