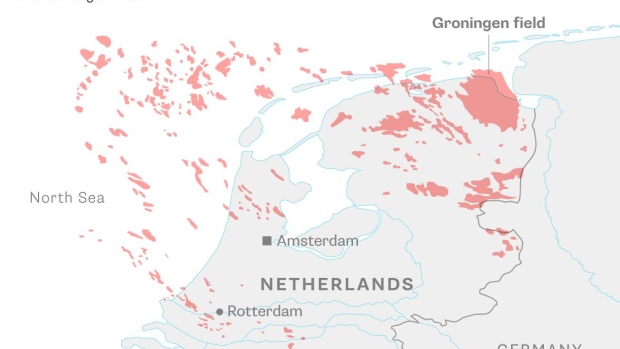 (Bloomberg) -- Natural gas production at the giant Dutch field Groningen may be temporarily increased because of construction delays at a processing plant for imported fuel.

The new nitrogen installation in Zuidbroek, Netherlands, is behind schedule after pandemic-driven lockdowns delayed delivery of building materials and construction work, Gasunie said in a statement on Tuesday. As a result, Groningen may be called upon for greater volumes of gas to ensure ample domestic supplies at a time when it was expected to begin shutting down.

Groningen is required to shut next year after decades of draining its gas triggered earthquakes, prompting the Dutch government to intervene. The announcement that the field may yield more fuel in coming months could help ease winter-supply concerns that have driven prices to all-time highs.

Groningen has been a key source of gas for much of Western Europe, as well as the backbone of Dutch sovereign finances, since output commenced in 1963. Imported gas is too rich to flow through the gas networks of the Netherlands and its neighbors, so it requires nitrogen treatment to make it suitable.

The Zuidbroek nitrogen was targeting an April 2022 startup but completion delays “had become a real risk”, Gasunie said in the statement. Two of the three production units are now expected to be ready by the end of June, with the remaining line slated for mid-August.

The decision on whether to pump more gas from Groningen also will hinge on the impact of winter weather on heating demand, according to a Gasunie spokeswoman.