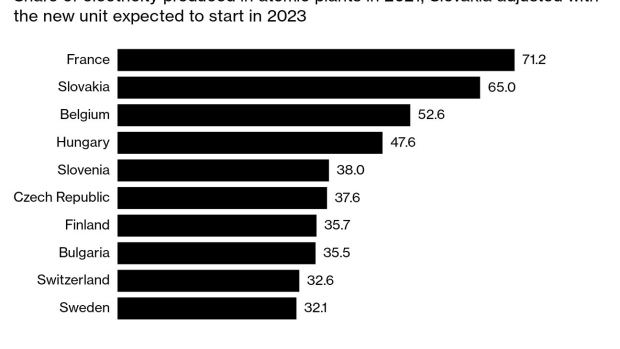 (Bloomberg) -- As Europe struggles to contain a worsening fuel crunch, one country is about to secure energy independence that will shield households from crippling electricity costs and the threat of blackouts.

A new nuclear reactor in Slovakia is due to start early next year, the nation’s first atomic generator to open in 22 years. The central European country will produce more electricity than it consumes, potentially ending the need for imports when the facility starts.

After 35 years in the making, the timing of Slovakia’s new reactor couldn’t be better as consumers across the continent face record energy bills after Russia cut natural gas supplies. European Union policy makers are pushing through measures to mitigate the crisis, ranging from taxes on energy company profits, to price caps and even mandatory restrictions on electricity use.

“We will certainly sleep better in this chaos on the European energy market,” said Branislav Strycek, the chief executive officer of Slovenske Elektrarne AS, the country’s main utility and owner of the new reactor. “Slovakia will become self-sufficient in electricity, we won’t depend on imports anymore.”

Slovakia imported a net 266 megawatts a day on average over the past year, according to Entsoe, the association of EU grid operators. The new 471-megawatt reactor at the Mochovce plant should be more than enough to ensure the country’s self-reliance in energy. With four other operating reactors, Slovakia already gets more than half of its electricity from nuclear, the second-biggest share in the EU after France.

More generating capacity is helping shield consumers against rocketing prices. In a deal contingent on the new reactor’s start, Prime Minister Eduard Heger’s cabinet signed a memorandum obliging Slovenske Elektrarne to provide households with electricity at a maximum 61 euros ($60) per megawatt-hour in 2023. That’s less than a third of the wholesale rate in the day-ahead power market.

Even so, one new reactor is unlikely to fully protect Slovakia from the worst of the energy crisis.

For one thing, the price limits for households don’t extend to businesses. Almost half of the country’s companies haven’t hedged their electricity costs for next year, according to the finance ministry, exposing them to wholesale prices that are six times higher than a year ago. Big energy users, such as aluminum producer Slovalco and fertilizer maker Duslo, have already closed or suspended production because of high prices.

Another headwind is that Slovakia will struggle to benefit from a European Commission proposal to cap electricity market revenues for renewable and nuclear companies at 180 euros per megawatt-hour. Any income above that level is directed to help energy users.

“We have already sold all our 2023 production below the proposed level of 180 euros, so Slovakia won’t receive any significant funds,” said Strycek.

And despite the advantages of nuclear, Slovakia is completely dependent on Russia’s TVEL for its reactor fuel under a contract that runs until 2026. While Moscow hasn’t yet curbed uranium shipments, Strycek may seek a supply deal with Westinghouse Electric Co. The US-based company is due to provide fuel to Ukraine next spring for the same Soviet-designed VVER 440 reactors that Slovakia uses.

Nuclear energy is still key to Slovakia. Slovenske Elektrarne is working on another reactor at Mochovce that should be ready in two years. Once finished, it will add another 471 megawatts of generating capacity and turn the country into an electricity exporter.