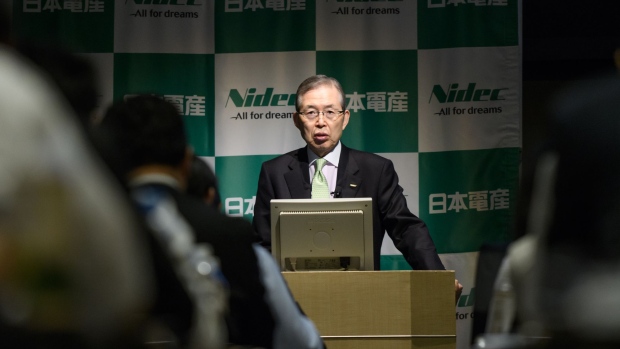 (Bloomberg) -- Less than a year after handing over the reins to a successor, Nidec Corp. Chairman Shigenobu Nagamori regrets appointing Jun Seki as Chief Executive Officer and has sidelined his deputy by sending him outside Japan, people with knowledge of the matter said.

Nagamori, 77, told senior managers in a message late last year that it was naive of him to bring in someone from outside and appoint that person as successor, the people said, asking not to be identified because the information isn’t public.

Nagamori recruited Seki, 60, a former Nissan Motor Co. executive, two years ago to help grow the manufacturer’s presence in the market for electric-vehicle motors, a key part of the company’s goal of reaching 10 trillion yen ($88 billion) in annual net sales by fiscal 2030.

Seki was promoted to CEO in June, yet was sent to Germany in December to tackle a dispute with a customer in the country, even though the issue doesn’t require him to be involved there for a long period of time, one of the people said.

Even before recently raising Nidec’s profit and sales targets for the fiscal year ending March, Nagamori began to complain about the performance of the company, which he founded in a shack next to his family’s farmhouse in 1973. While Nagamori has built a reputation as one of Japan’s top managers, the uncertainty surrounding Nidec’s leadership is starting to sow concern among employees, the people said.

A representative for Kyoto-based Nidec declined to comment on Nagamori’s actions, and didn’t make the chairman or Seki available for comment.

Seki, who had been given direct oversight of the division that makes motors for EVs, is still in Germany and will participate remotely during Nidec’s quarterly earnings announcement scheduled for Wednesday, the people said.

Hiroyuki Yoshimoto, another former Nissan manager brought in by Nagamori several years ago as heir apparent, was demoted and sent to the U.S. before he resigned.

Last September, Nagamori sent a bluntly worded memo describing his dissatisfaction with the manufacturer’s business performance and telling senior managers they needed to do more to boost Nidec’s profitability and share price. Nagamori, who is known to regularly send such missives, told them to accelerate efforts to improve operations, although he didn’t specify what needed to be fixed.

The founder also urged employees to re-read 1,000 times “The Challenging Road,” a booklet that, according to Nidec’s website, describes his “business and action philosophies, as well as Nidec’s business policies and the Nagamori-ism.”

Nidec is projected to post 1.83 trillion yen in sales for the current fiscal year, according to the average of analysts’ estimates compiled by Bloomberg, slightly above the manufacturer’s own forecast for 1.8 trillion yen. For fiscal 2025, Nidec is targeting 4 trillion yen in revenue and 3.5 million unit sales of traction motors for EVs, a goal upgraded from 2.8 million in October.

While Nagamori has built a reputation over the years as a tough and demanding leader, unpredictable management at the top underscores the uncertainty looming over Nidec’s post-Nagamori future. Analysts had warned before he stepped down that if the transition of power wasn’t smooth, Nidec could lose its “Nagamori premium.”

Nagamori had set a goal for Nidec to become Japan’s fifth-largest enterprise in terms of market capitalization in 2023 to mark the 50th anniversary of the company’s founding. The manufacturer’s market value is currently around 6.6 billion yen, placing it 17th, data compiled by Bloomberg shows.

In April last year, at a news conference announcing Seki’s appointment as CEO from June, Nagamori said the two shared similar management styles, such as quick decision-making and the ability to lead. “All these make him a worthy successor,” Nagamori said at the time.