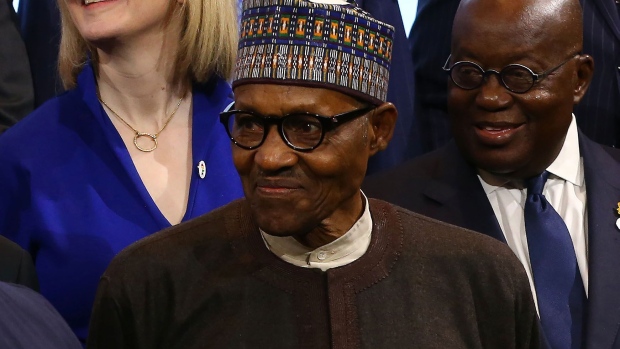 Muhammadu Buhari, Nigeria's president, takes part in a family photo with leaders of African countries at the U.K. - Africa Investment Summit at the Intercontinental Hotel in London, U.K., on Monday, Jan. 20, 2020. U.K. Prime Minister Boris Johnson will reinforce his vision of a global Britain trading freely outside the EU on Monday, when he hosts African leaders at an inaugural summit. , Bloomberg

The Economic Community of West African States is leading efforts to install a civilian administration in Mali after the military overthrew President Ibrahim Boubacar Keita last week. His ouster has left a power vacuum in a nation that’s a linchpin in counter-insurgency operations on the southern fringe of the Sahara desert.

“About two-thirds of Mali is occupied by terrorists, and it makes common sense to secure the country,” Buhari said in a statement Wednesday after meeting with his predecessor Goodluck Jonathan, who is Ecowas’s chief mediator on Mali.

Jonathan led an Ecowas delegation to the Malian capital, Bamako, that met with the junta at the weekend. The regional bloc proposed an interim government, led by a civilian or retired military officer, that would last a maximum of 12 months. The junta proposed a three-year transition, the Nigerian presidency said.

France is also concerned about the impact the coup will have on its military operations in the region, Jeune Afrique reported, citing French Foreign Minister Jean-Yves Le Drian. There are 5,000 French troops fighting Islamist militants in the Sahel, alongside more than 13,000 United Nations peacekeepers in Mali alone.

Keita, 75, was elected to office in 2013, just over a year after his predecessor, Amadou Toumani Toure, was himself ousted in a coup. That putsch was staged from the same barracks where last week’s mutiny started, and organized by junior officers frustrated by the lack of resources deployed to fight Tuareg separatists. The subsequent instability was exploited by al-Qaeda-linked Islamist groups, who seized control of the north.

French President Emmanuel Macron has called for the release of Keita, who has been detained by the military since Aug. 18, and a return to civilian rule. Many Malians celebrated the coup, which came after weeks of popular protests calling for Keita’s resignation.

The junta refused to return Keita to his personal residence because he could travel abroad and “not return to answer questions they may have for him,” Jonathan was quoted as saying in the Nigerian presidency statement.