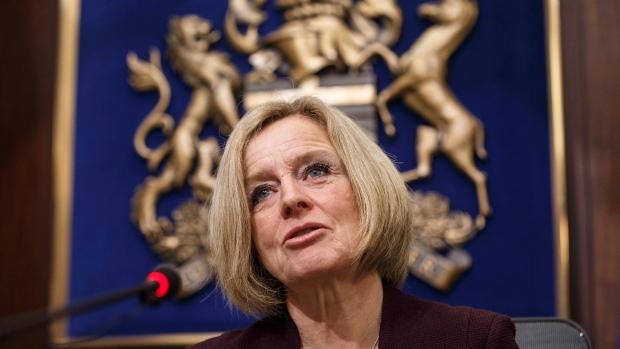 It’s been one working week since Alberta Premier Rachel Notley announced her decision to force curtailments on the province’s oil producers, triggering a wave of reaction from industry players and analysts that ranged from applause to apprehension.

Here is a round-up of some of the comments industry insiders and political stakeholders shared with BNN Bloomberg:

“This was going to have a very, very big effect… If the government had not stepped in, not only would Cenovus have massively cut back its winter program, but that would have had knock-on effects to the communities we work in and the contractors that we use.”

Cenovus CEO Alex Pourbaix joins BNN Bloomberg with his take on Alberta Premier Rachel Notley's decision to cut crude production in the province and what it means for the oil patch.

“It’s interesting how people, even the government, are almost apologetic for having to do this because they’re ‘interfering in the market.’ The market already has been interfered with by the lack of action and the inability to get the pipelines done, which [is] really a situation in which the policies of the federal government have prevented it. I think this is a no-brainer and I’m really surprised it took so long.”

Gwyn Morgan, founder and former CEO of Encana, calls Alberta's oil output cuts a "no-brainer" and tells BNN Bloomberg he's surprised it took this long for the Alberta government to implement this measure. He said comments to the contrary are coming from those with vested interest.

“There are people that are unhappy with it, but I think everybody in the industry agrees that this market has not been working. And so, I do agree with the intervention. I think that it is being done in a way that is targeted, that is time-limited and there’s still, I think, a lot of people in the equity markets that need to understand what this is going to look like.”

- Rona Ambrose, global fellow of the Woodrow Wilson Canada Institute and former interim leader of the Conservative Party of Canada

Alberta Premier, Rachel Notley is urging producers to curb their production in an effort to boost the ailing energy sector. Rona Ambrose, NAFTA Advisory Council member and global fellow of the Woodrow Wilson Canada Institute, tells BNN Bloomberg that there are only "winners and neutrals" with this move.

“I think it was really the only option at this point. The government of Alberta had to do something in response to a difficult situation that’s really been created by [the federal] government. It’s been the regulatory delays over pipeline construction that many of us foresaw more than 10 years ago … I really – after having thought about all the options – don’t know what else the government of Alberta could have done.”

'Alberta did what it had to do' by cutting oil output: ARC Resources chair

Hal Kvisle, chairman of ARC Resources and former CEO of TransCanada, says while he has sympathy for Husky and Imperial Oil and that the oil crisis in Canada is an "extraordinary situation" that required action. He also says Canada's regulatory process continues to be a key issue for the industry and that Bill C-69 is going to "make things worse."

“We don’t have enough confidence at this point in time - given the lack of action by the federal government with respect to supporting the premier of Alberta on rail - to say let’s get right back after it and spend $500 million. We need greater certainty that what we’re seeing unfold today is going to persist for a period of time.”

MEG Energy CEO Derek Evans discusses his support for Alberta's plan to curtail some oil output in the province, as well as the latest on Husky Energy's hostile takeover bid for the company.

“That these desperate measures became necessary because of the desperate times in which Albertans and frankly others in Western Canada find themselves, much of it has to do with self-made problems. These are Canadian issues that we could have resolved... The agenda has been hijacked to some extent by others who feel that somehow energy is an obstacle, or is not to be exported.”

- Goldy Hyder, CEO of the Business Council of Canada

Premier Notley's plan to cut oil production comes with mixed views. Goldy Hyder, CEO of the Business Council of Canada, says business leaders are on different sides of this in terms of what their interests are. He also notes that it is quite telling for desperate measures such as these to have become necessary.

“Companies have to do what’s in the interest of their shareholders and the survival of their companies, and producing oil when you’re getting paid US$14 and US$15 a barrel isn’t prudent… Does it have an impact on the economy? Of course it does. And that’s why the country as a whole has to realize: this is not Alberta’s problem, it’s not Saskatchewan’s problem. This is Canada's problem."

'Ottawa is getting the message': TD Deputy Chair McKenna on Canada's oil crisis

Ahead of the premiers' first ministers meeting this Friday, Alberta Premier Rachel Notley and Saskatchewan Premier Scott Moe have sent a letter to Justin Trudeau urging him to put oil on the agenda. Frank McKenna, deputy chairman at TD Bank and board member at Canadian Natural Resources, tells BNN Bloomberg the energy sector woes are "not Alberta’s problem, it’s not Saskatchewan’s problem – this is Canada's problem."

“We do have an important moment of political consensus here … This is not a natural thing for a free-market party or leader such as myself, who believes in limited government intervention, to support, but I came to the conclusion that governments broke the market by not getting pipelines built.”

Jason Kenney: Ottawa needs to do more to help Alberta

Jason Kenney, Leader of Alberta's United Conservative Party discusses why the federal government should be doing more to help Alberta through its current crisis.

“The sad news for Canadians, I think, is this is now a long-term issue to fix. And, if the governments want to come clean and actually tell people what the real problem is, then they need to come out and tell people this is probably a three-to-five-year process.”

‘Canadians are watching their net worth shrink’: Canoe’s Rafi Tahmazian on energy woes

Rafi Tahmazian, senior portfolio manager with Canoe Financial, shares his recommendations with BNN Bloomberg on how to get out of current energy crisis.

“I think there’s an opportunity for a frank conversation [on how to help Alberta], but I think we all know what the challenge is. It’s getting the resources to market. That’s the longer-term solution.”

From pipelines to the carbon tax, Catherine McKenna, environment and climate change minister, talks to BNN Bloomberg ahead of the first ministers' meeting about the pressures Ottawa is facing amid the energy crisis.